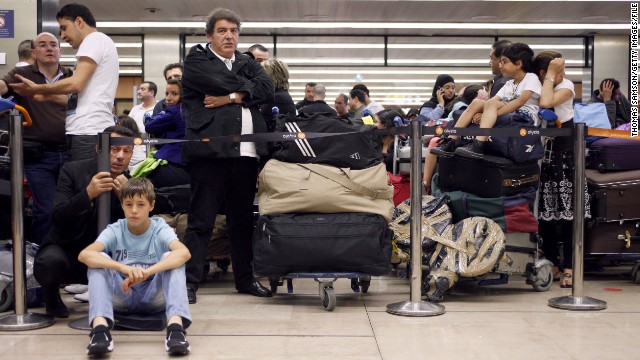 In his weekly address on Saturday, Obama suggested lawmakers were more concerned with air controllers than with other programs, like Head Start and federal medical research,
that remain fully bound by the strict terms of the cuts that took effect in March.

"This week, the sequester hurt travelers, who were stuck for hours in airports and on planes, and rightly frustrated by it," Obama said, using Washington jargon for the mandatory spending cuts.

"And, maybe because they fly home each weekend, the Members of Congress who insisted these cuts take hold finally realized that they actually apply to them too," Obama said.

Under sequester, FAA was forced to find $600 million in cuts to its budget between March and next September 30, the end of the fiscal year.

Part of that austerity, the agency insisted, required employee furloughs that would apply to its 15,000-member controller work force.

The furloughs began to hit on Sunday and resulted in more than 3,000 flight delays, officials said.

Vocal and politically powerful aviation interests argued that the cuts affecting their industry would hurt business, travelers and cost jobs. Hundreds of millions of people fly on U.S. airlines annually.

Obama argued on Saturday that the FAA budget changes amounted to only a "temporary fix" that would only forestall more significant inconveniences for Americans.

"These cuts are scheduled to keep falling across other parts of the government that provide vital services for the American people," he said. "And we can't just keep putting Band-Aids on every cut. It's not a responsible way to govern. There is only one way to truly fix the sequester: by replacing it before it causes further damage."

Rep. Bill Schuster, chairman of the House Transportation and Infrastructure Committee, agreed in the GOP weekly address that the automatic spending cuts needed to be replaced.

But he said the delays caused by the FAA staffing shortages were an unnecessary – and politically motivated – move to force Congress into agreeing to higher taxes.

The agency could have found other ways to cut its budget aside from staffing reductions, he said.

"They could have taken into account air traffic patterns, and made sure controllers would be in place where they were most needed," Schuster argued. "Or they could have reached out to Congress and the airlines to have a plan in place ahead of time."

"Instead, the FAA imposed blanket across-the-board furloughs, including air traffic controllers, causing these extensive delays," he continued. "Why? Because there are some in the Obama administration who thought inflicting pain on the public would give the president more leverage to avoid making necessary spending cuts, and to impose more tax hikes on the American people."