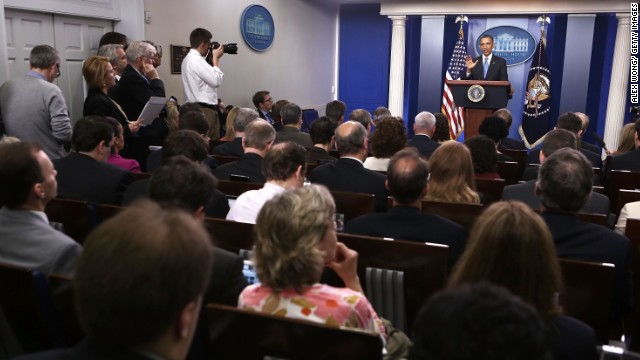 TRAIL TRIVIA
(Answer below)
On this day, President George Washington gave his first inaugural address. How much was Washington paid in 1789?

Obama: “The use of chemical weapons would be a game changer not simply for the United States, but for the international community and the reason for that is that we have established international law and international norms that say when you use these kinds of weapons, you have the potential of killing massive numbers of people in the most inhumane way possible and the proliferation risks are so significant that we don't want that genie out of the bottle. … We've got to do everything we can to investigate and establish with some certainty what exactly has happened in Syria, what is happening in Syria. We will use all the assets and resources that we have at our disposal. We'll work with the neighboring countries to see whether we can establish a clear base line of facts and we've also called on the United Nations to investigate.”

2.) Self radicalization vs. international terror

Obama: “Because of the pressure that we've put on al Qaeda core, because of the pressure that we've put on these networks that are well-financed, more sophisticated and can engage in and project trans-national threats against the United States, one of the dangers that we now face are self-radicalized individuals who are already here in the United States, in some cases may not be part of any kind of network. But because of whatever warped, twisted ideas they may have (and) may decide to carry out an attack. And those are in some ways more difficult to prevent. And so what I've done for months now is to indicate to our entire counterterrorism team what more can we do on that threat that is looming on the horizon?”

Obama: “There are commonsense solutions to our problems right now. I cannot force Republicans to embrace those common sense solutions. I can urge them to, I can put pressure on them, I can rally the American people around those common sense solutions, but ultimately they themselves are going to have to say we want to do the right thing. … Their base thinks that compromise with me is somehow a betrayal. They're worried about primaries and I understand all that and we're going to try to do everything we can to create a permission structure for them to be able to do what's going to be best for the country but it's going to take some time.”

4.) Obama wants to close Guantanamo, years after he first promised to do it

Obama: “I continue to believe that we've got to close Guantanamo. …This (keeping Guantanamo open) is not something that's in the best interest of the American people and it's not sustainable. I mean, the notion that we're going to continue to keep over 100 individuals in a no-man's land in perpetuity, even at a time when we've wound down the war in Iraq, we're winding down the war in Afghanistan, we're having success defeating al Qaeda core, we've kept the pressure up on all these transnational terrorist networks, when we've transferred detention authority in Afghanistan, the idea that we would still maintain forever a group of individuals who have not been tried, that is contrary to who we are. It is contrary to our interests and it needs to stop.”

“Given the importance of sports in our society, for an individual who has excelled at the highest levels in one of the major sports to come out and say, ‘This is who I am, I'm proud of it. I'm still a great competitor. I'm still seven foot tall and can bang with Shaq and deliver a hard foul.’ And I think a lot of young people out there who are gay or lesbian who are struggling with these issues to see a role model like that who is unafraid, I think it's a great thing.”

Leading CNNPolitics: McDonnell: 'Ability to serve' isn't impaired by FBI investigation
Virginia's Gov. Bob McDonnell said Tuesday his personal relationship with a top donor had not affected any government decisions, and that a federal investigation into the relationship would not affect his ability to govern the commonwealth. His remarks came after reports the FBI is probing ties between the Republican governor and a top campaign donor who paid for catering at McDonnell's daughter's wedding.

Leading Drudge: $100G In Benefits For Bombers
The Tsarnaev family, including the suspected bombers and their parents, benefited from more than $100,000 in taxpayer-funded assistance — a bonanza ranging from cash and food stamps to Section 8 housing from 2002 to 2012, the Herald has learned. “The breadth of the benefits the family was receiving was stunning,” said a person with knowledge of documents handed over to a legislative committee today. – Chris Cassidy for the Boston Herald

Leading HuffPo: You Shall Not Pass
It's bad enough that there are 82 vacant federal judge slots around the country, a level so high that many observers have deemed it a crisis situation. But perhaps even more startling is the fact that of those 82 vacant slots, 61 of them don't even have a nominee. – Jennifer Bendery

Leading Politico: Obama: More facts needed on Syria
President Barack Obama won’t rush to judgment in responding to Syria’s apparent use of chemical weapons, he said Tuesday, hinting that he’s looking for more proof than the United States had in President George W. Bush’s run-up to the Iraq war a decade ago. – Jennifer Epstein

Leading The New York Times: Immigration Splits Senator From Mentor
Jim DeMint, a former Republican senator, who helped kill legislation to overhaul immigration, finds Marco Rubio, his onetime protégé, on the other side of the issue. – Ashley Parker

- Republicans on the Hill respond negatively to Obama press conference -
HOUSE ARMED SERVICES CHAIRMAN BUCK MCKEON IN A WRITTEN PRESS RELEASE: “The president faces bipartisan opposition to closing Guantanamo Bay's detention center because he has offered no alternative plan regarding the detainees there, nor a plan for future terrorist captures. For years, Congress has encouraged the president to develop a comprehensive detention policy. In the administration's failure to do so, they have removed lawful options from our counterterrorism arsenal.”
HOUSE SPEAKER JOHN BOEHNER’S SPOKESMAN MICHAEL STEEL IN A WRITTEN STATEMENT: “The American people are still asking, where are the jobs, and the president still has no solutions for them. Regardless of the topic – Syria, his sequester, the ‘train wreck’ of implementing his health care law, or Gitmo – the president had a lot more excuses than answers today.”
REPUBLICAN SEN. LINDSEY GRAHAM IN A WRITTEN PRESS RELEASE: “With all due respect Mr. President, Benghazi and Boston are compelling examples of how our national security systems have deteriorated on your watch.”

- Time to ‘de-mythologize’ and ‘de-politicize’ Benghazi, says Kerry -
SECERTARY OF STATE JOHN KERRY AT A MEETING WITH SPAIN’S FOREIGN MINISTER: “On Benghazi, look there's an enormous amount of misinformation out there. … We have to de-mythologize this issue and certainly de-politicize it. The American people deserve answers. I'm determined that this will be an accountable and open State Department as it has been in the past, and we will continue to do that and will provide answers.”

- Michelle Obama, Jill Biden: Businesses must hire more vets -
MICHELLE OBAMA AND JILL BIDEN IN A FORTUNE MAGAZINE OPINION PIECE: “These men and women are some of the highest-skilled, best-trained, hardest-working people in this country. They are medics and engineers, drivers and welders, computer technicians and machinists. They are eager to work and determined to keep on serving this country. All they need is a chance. But the challenge of giving them that chance is only becoming more urgent. In the coming years, more than a million service members will be hanging up their uniforms and transitioning to civilian life. That's on top of the hundreds of thousands of veterans and military spouses already out there looking for work.”

- McDonnell: 'Ability to serve' isn't impaired by FBI investigation -
REPUBLICAN GOV. BOB MCDONNELL OF VIRGINIA IN AN INTERVIEW WITH WASHINGTON, DC’S WTOP: “I've been blessed to have a lot of friends. Mr. Williams and his wife Celeste have been family friends for four or five years. I think it's important the people of Virginia know that nothing has been done with regard to my relationship to Mr. Williams or his company Star Scientific, to give any kind of special benefits to him or his company, or frankly any other person or any other company.”

Gut Check Full Service: Washington Post: FBI looking into relationship between McDonnells, donor… FBI agents are conducting interviews about the relationship between Virginia Gov. Robert F. McDonnell, his wife, Maureen, and a major campaign donor who paid for the food at the wedding of the governor’s daughter, according to four people familiar with the questioning. – Rosalind S. Helderman and Jerry Markon

Of the 53 senators who voted against #immigration in 2007, 31 are still in the Senate. http://t.co/MMMkcJNIZF

"The Pampered World of Congressional Air Travel" – stopping FAA furloughs was even more self-serving than u thought: http://t.co/yRp8I4Xvuo

During my interview, Weiner repeatedly marveled at his success in business. "I am pretty good at it," he said: http://t.co/T9kr033DXI

49% of the public say they don’t have enough info about the #ACA to understand how the law will affect their family http://t.co/VB8ohx9kas

Man loses life savings in carnival game: "All he ended up winning was a stuffed banana w dreadlocks" http://t.co/b1HkJ9hEOD via @JoshDorner

In front of Federal Hall in New York City, former General George Washington was sworn in as the first president of the United States on this day in 1789. He was a trendsetter – few presidential inaugurations since then have deviated from Washington's ceremony.

In his speech, Washington announced he planned to take no salary for his services.

"To the foregoing observations I have one to add, which will be most properly addressed to the House of Representatives," he said. "It concerns myself, and will therefore be as brief as possible. When I was first honored with a call into the service of my country, then on the eve of an arduous struggle for its liberties, the light in which I contemplated my duty required that I should renounce every pecuniary compensation."

The Constitution and the House of Representatives had other ideas, however. Article II, Section 1, Clause 7 of the document says: "The President shall, at stated Times, receive for his Services, a Compensation, which shall neither be increased nor diminished during the Period for which he shall have been elected, and he shall not receive within that Period any other Emolument from the United States, or any of them."

Additionally, representatives in the House were concerned that if the first president didn't take a salary, it would set a precedent for the rest, which would close the presidency off to most Americans who were not well-off enough to work for four years without pay.