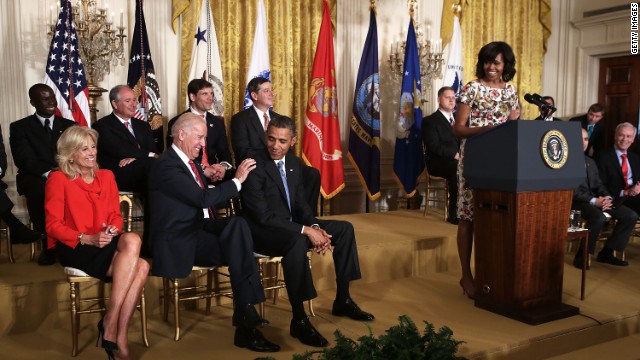 "If you can save a life on the battlefield then you can sure as heck save one in an ambulance, if you can oversee a convoy of equipment and track millions of dollars of assets then you can run a company supply chain or you can balance its books," President Obama said.

Flanked by military veterans and business leaders, the two power couples held an event in the East Room Tuesday to continue their push for their initiative "Joining Forces" which was launched by President Obama in August 2011 with the initial commitment for businesses to hire or train 100,000 veterans or military spouses by 2013.

That benchmark was met one year later with the added goal of helping 250,000 more veterans and military spouses by the end of 2014. The first lady announced on Tuesday that companies have trained or hired 290,000 veterans and military wives since August. She added the next commitment would be 435,000 more jobs over the next five years.

First lady Michelle Obama and Jill Biden have been the driving forces behind the program.

"These efforts are about so much more than a paycheck, it's about giving these men and women a source of identity and purpose, it's about providing thousands of families with financial security and giving our veterans and military spouses the confidence that they can provide a better future for their children," Mrs. Obama said.

The first lady also pointed out the moral obligation American companies have to hire more veterans, saying "Our men and women in uniform and their families are standing up for us, they are standing up for our values, our security, our communities and in so many ways all they are looking for is another way to serve. All they need is that next mission; all they need is a job."