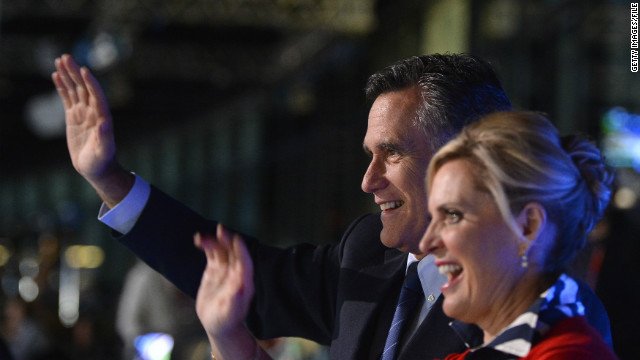 San Diego Mayor Bob Filner, a Democrat, told the Associated Press over the weekend that he wants the former Massachusetts governor, who's been credited with saving the 2002 Salt Lake City Winter Olympic Games, to head up the 2024 bid for San Diego and its neighboring city, Tijuana, Mexico.

While running for president last year, Romney and surrogates frequently pointed to his leadership during the 2002 games, which faced scandal and financial struggles until Romney came on board.

Romney attended the Opening Ceremony of the 2012 Olympic Games in London during his campaign for president. While in the city, he stirred controversy when he seemingly offered criticism of a few things he found "disconcerting" about the handling of the Games in London.

In the interview with NBC, Romney said there were three elements that made an Olympic Games successful: athletes, volunteers, and the people living in the country where the competition takes place.

He later added in a meeting with Ed Miliband, the leader of the Labour opposition party, that mistakes were inevitable when it comes to the Olympics.

"My experience with regards to the Olympics is it is impossible for absolutely no mistakes to occur," Romney said. "Of course there will be errors from time to time, but those are all overshadowed by the extraordinary demonstrations of courage, character and determination by the athletes."

Romney has strong ties to Southern California, as he owns a coastal home in La Jolla outside of San Diego.

He currently serves as a chairman of Solamere Capital's executive committee based in Boston. The investment firm was founded by his eldest son, Tagg.

In December, he rejoined the board of directors at Marriott International, Inc., a position he held prior to his White House bid.