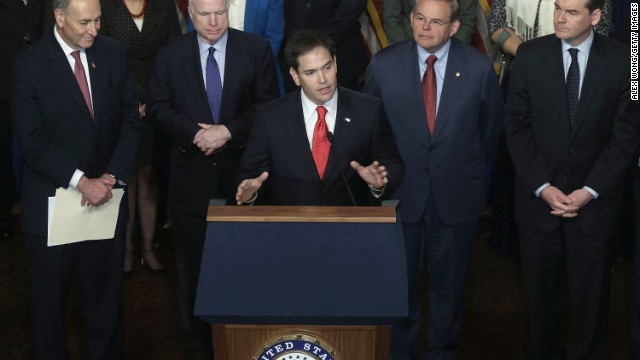 "The bill that's in place right now probably can't pass the House," the junior senator from Florida said on Mike Gallagher's conservative radio show. "It will have to be adjusted, because people are very suspicious about the willingness of the government to enforce the laws now."

The proposal, unveiled by the eight senators two weeks ago, calls for a 13-year path to citizenship for those who entered the United States illegally before 2012.

It would take 10 years for such undocumented immigrants to get green cards and then another three years to gain citizenship. Along the way, they would have to pay a fine and back taxes and pass a background check.

The legislation also mandates that there be no path to legality until it is determined that the U.S. border with Mexico is secure. It's that trigger, Rubio says, that has many Republicans worried. If the federal government fails to enforce border security right now, critics wonder whether they would do so in the future.

"That is a very legitimate suspicion, it's one that I share, and if there's anything we can do to make (the bill) even tighter...that's exactly what we should be working on."

The bill, which Rubio labeled a "starting point," will soon face committee markups. The senator said he's heard "some valid points" from those who object to the bill and welcomed any amendments or changes that will make the legislation more appealing in the House.

"Let's try to fix it," Rubio said. "Let's try to change it, but to just say, 'let's defeat the whole thing,' I don't think that's a productive approach either."

On the House side, a bipartisan group of lawmakers has also been working on a proposal, though they've been quieter about it than the Senate's Gang of Eight.

President Barack Obama said in a news conference Tuesday that the Senate's plan meets criteria that he believes are necessary. This includes more effective border security; a crackdown on employers "gaming the system;" making the legal immigration system work more effectively; and making sure there is a pathway to citizenship for immigrants already in the country.

He said he hasn't seen what House members are proposing and promised to be open-minded about whether they can address the issue better. But, he added, "The bottom line is, they still have to meet those basic criteria."

Looking through a more political lens, critics have argued that allowing millions of undocumented immigrants to have eventual citizenship will make things worse electorally for the Republican Party, as a strong majority of Latinos voted for Democrats in November.

"I am not prepared to admit that an entire population of people, because of their heritage, aren't willing to listen to our pitch on why limited government is better."