Rep. Steve King decides not to run for Senate

(CNN) – Republican Rep. Steve King of Iowa decided against running for the U.S. Senate, saying Friday he wants to focus on legislation in the House rather than spend time on the campaign trail. “We have in front of us in Congress a series of potent issues which will redirect the destiny of our state and nation,” he said in a statement.

“Among them are a farm bill, ObamaCare, debt and deficit, immigration, and tax reform. If I step away from these responsibilities while campaigning in an effort to multiply leverage in the Senate, what becomes of our nation in the mean time?”
END_OF_DOCUMENT_TOKEN_TO_BE_REPLACED

(CNN) - Former Sen. Rick Santorum of Pennsylvania said Friday he plans to attend the Iowa State Fair in August, a traditional stop in the first-in-the-nation caucus state for those considering a run for president.

In an interview with CNN’s Jim Acosta, Santorum also criticized the Food and Drug Administration approval this week of the Plan B One-Step emergency contraception pill without a prescription for women 15 and older.
END_OF_DOCUMENT_TOKEN_TO_BE_REPLACED

Speaking to a welcoming crowd at the National Rifle Association convention in Houston, the folksy former governor from Alaska also used chewing tobacco at one point to draw some laughs.
END_OF_DOCUMENT_TOKEN_TO_BE_REPLACED

(CNN) – Regrouping with the nation's leading law enforcement representatives three weeks after bipartisan gun-control legislation suffered a surprising defeat in the Senate, Vice President Joe Biden indicated he will begin a new push to rally the American public around the issue, according to attendees of the meeting.

"He said he is committed to seeing this through. He wants to hit the road and interact with stakeholders and the public in general and continue to educate them on what the purpose of this legislation is," said Jon Adler, President of the Federal Law Enforcement Officers Association and one of the participants in the meeting.
END_OF_DOCUMENT_TOKEN_TO_BE_REPLACED 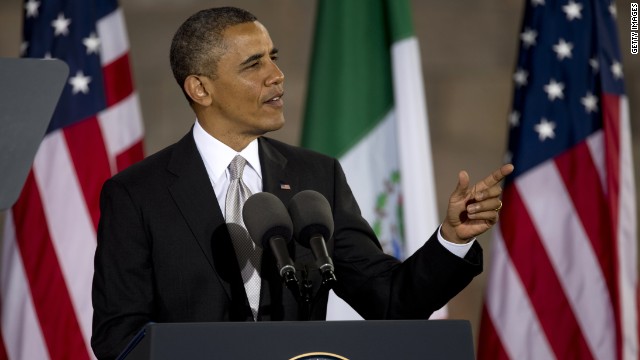 END_OF_DOCUMENT_TOKEN_TO_BE_REPLACED

"Where we see tragedy, Barack Obama and Michael Bloomberg, they see opportunity," said Chris Cox, the executive director for the NRA's Institute for Legislative Action.
END_OF_DOCUMENT_TOKEN_TO_BE_REPLACED

(CNN) - President Barack Obama said Friday he came to Mexico to break down stereotypes between the United States and its neighbor to the south.

Speaking at the Museum of Anthropology in Mexico City, Obama said that too often the relationship between the United States and Mexico is "trapped in old stereotypes," where Mexicans see America as trying to wall itself off from Mexico and Americans see Mexico through the sensational headlines of violence in the war on drugs.

(CNN) – A better-than-expected jobs report Friday was still cause for concern among Republicans, who said the wide swath of Americans still looking for work were being poorly served by President Barack Obama's policies.

"Today's jobs report brings some good news for a lucky few who found jobs–but not nearly enough hope for the millions of Americans who still need work," wrote Republican National Committee Chairman Reince Priebus in a statement issued shortly after the jobs report's release. He singled out the Affordable Care Act, Obama's sweeping health care law, as a cause for further unemployment.
END_OF_DOCUMENT_TOKEN_TO_BE_REPLACED

(CNN) – The route to legal status for undocumented immigrants, spelled out in pending Senate legislation, could be made even tougher by Congress, Republican Sen. Marco Rubio wrote in an op-ed Friday.

Rubio is one of the most high profile members of a bipartisan "Gang of Eight" senators who unveiled immigration reform legislation last month that includes an eventual pathway to citizenship for many undocumented immigrants. It also mandates tighter border security and better enforcement of current immigration laws.
END_OF_DOCUMENT_TOKEN_TO_BE_REPLACED

New York (CNNMoney) - Job growth was stronger than initially reported at the start of 2013, and U.S. employers continued to hire in April.

The economy added 165,000 jobs in April, according to a Labor Department report released Friday.