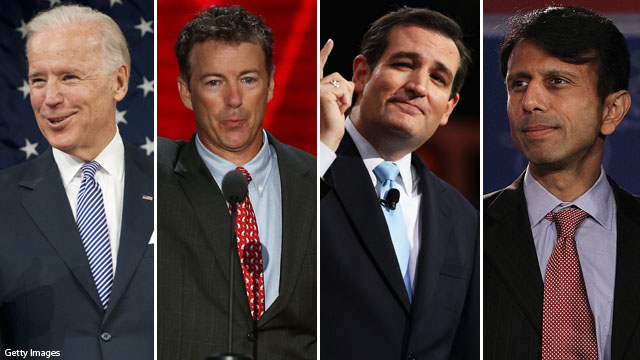 Paul heads to the Granite State a week and a half later to keynote a GOP dinner.

Two easy questions: What do all these politicians have in common?

Answer: They're all contemplating bids for the White House in 2016.

And what do the locations they're visiting have in common?

They're all crucial early voting states in the presidential primary and caucus calendar.

While we're only six months removed from the last presidential election, the early moves in the next race for the White House are underway, with potential future candidates making calls and paying visits to such states as Iowa, whose caucuses lead off the presidential primary season, New Hampshire, which goes second and holds the first primary, and South Carolina, the first southern state to vote.

"The starting gun for 2016 presidential campaign was fired when President Obama was asked at a press conference if he is a lame duck with no 'juice'. The answer, according to all these prospective candidates rushing to fill the vacuum, is that he is," says GOP strategist and CNN contributor Alex Castellanos, who is spearheading a new super-PAC called the NewRepublican.org to refocus the party's messaging and policy goals.

Some potential White House hopefuls have already paid visits to the early states. Gov. Martin O'Malley of Maryland headlined a Democratic Party event in South Carolina in March and former Sen. Rick Santorum of Pennsylvania, a 2012 Republican presidential candidate who battled eventual GOP nominee Mitt Romney deep into the primary season, was supposed to keynote the spring meeting of Iowa Faith and Freedom Coalition, a leading social conservative group in the state, before he cancelled due to illness.

"Campaigns for president are no longer twelve month campaigns, they are now three or four year-long campaigns, especially for people who have to raise small donations, who can't write their own large checks. They have to start working these things early," John Brabender, a senior adviser to Santorum, recently told CNN.

But another veteran of presidential politics thinks it's too soon for all these visits to the early voting states.

"We're barely into the president's new term and they're already starting. It's like asking the widow out on a date at the wake," says Democratic strategist and CNN contributor Paul Begala, a senior political adviser in the Clinton White House who last cycle advised the pro-Obama super PAC Priorities USA.

But if you need more proof that the next presidential cycle has begun, consider this: CSPAN is branding their live coverage of Friday night's Biden speech as "Road to the White House 2016."