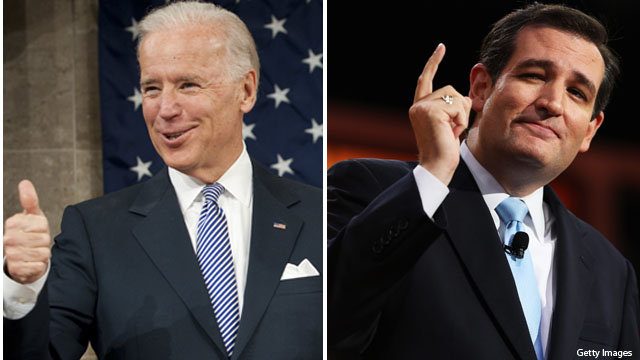 (CNN) – While the countdown to the next presidential election has already begun with talk of potential contenders, it felt like the 2016 drumroll picked up a little more speed Friday night in South Carolina.

And Biden, who was a guest at South Carolina Democratic Party’s Jefferson Jackson dinner, was aware of the spotlight.

“Jim called me and asked me if I'd be willing to do this, and I said, ‘Jim, you know I love going to South Carolina, but as soon as I show up in South Carolina, there will be Washington press coming down, saying is Biden getting ready?’” Biden said at the top of his remarks, attempting to make clear that he was there because he goes “anywhere” Rep. James Clyburn, D-South Carolina, asks him to go. “I'm delighted to be back here in South Carolina.”

Candidates seeking the White House traditionally make stops in South Carolina, along with the other early voting states of Iowa and New Hampshire, as a way to tap into the state’s political establishment and fundraising resources.

While the vice president delivered remarks comparable to his campaign stump speeches last year–focusing on the middle class and attacking Republican policies—he dedicated considerable time to acknowledging the people in the room and talking about his love for the state. He especially praised former Democratic Sen. Fritz Hollings, saying he admired the veteran lawmaker “more than any man that I have served with.”

“It's particularly good to be back in South Carolina knowing you're about to get another Democratic congressional seat in the First District. All you had to do was watch that debate to understand why Elizabeth is going to make such a great congresswoman,” he said to applause, referring to the candidates’ first and only debate on Tuesday. “They ain’t seen nothing yet.”

But the vice president mostly focused on current issues facing Washington, and argued that Republicans are simply piggybacking on the Democratic Party’s message to help the middle class.

“All of a sudden, since the last election, you hear our Republican friends talk about how much they value the middle class. I bet it's going on over at that silver elephant thing,” he said.

That “silver elephant thing’ happened to be the GOP Silver Elephant annual dinner in Columbia where Cruz began speaking merely minutes after Biden wrapped up his remarks. This year’s event was held in honor of former Sen. Jim DeMint, who resigned from his seat at the end of 2012 to head the Heritage Foundation, a conservative think tank in Washington.

In addition to Cruz, a number of familiar faces addressed the dinner either in person or by video, including Sens. Lindsey Graham and Tim Scott of South Carolina, Sen. Marco Rubio of Florida, Sen. Pat Toomey of Pennsylvania, Sen. Jeff Flake of Arizona, and Gov. Nikki Haley.

Shortly after stepping on stage as they keynote speaker, Cruz acknowledged the Democratic gathering down the road.

“So Vice President Joe Biden is in town,” he said, as some in the crowd began to laugh. “You know the great thing is you don't even need a punch line. You just say that and people laugh.”

Cruz dedicated a large portion of his speech to DeMint, thanking the former senator for supporting him and other conservatives in Republican primaries when they were underdogs at the time facing establishment candidates. DeMint became known as a kingmaker among conservative Republicans, using his power to back candidates like Cruz, Rubio, Flake, Sen. Mike Lee of Utah and Sen. Rand Paul of Kentucky—all of whom have been elected since 2010.

Noting his Texan roots, Cruz took the opportunity to inject a Chuck Norris joke, as well.

Known as a rising star in the GOP, Cruz was not shy about touting his headline-making moments in his thus-far four months in the Senate. He pointed to his grilling of U.S. Attorney General Eric Holder over the government’s drone policy and his assistance in Sen. Paul’s 13-hour talking filibuster later that day.

The first-term senator, who spoke earlier Friday at the National Rifle Association convention in Houston, also reminded the audience of his joint-threat to filibuster the gun control package with Sens. Paul and Lee. Other Republican senators also vowed to block the legislation, but their filibuster was overcome days later.

In his speech, Cruz focused on themes of growth and opportunity—two areas in which he says the Obama administration is failing the American people.

“A couple of days ago, Jay Leno observed, ‘So the president is having a hard time shutting down Guantanamo.’ Well I’ve got an idea: he can just declare it a small business, do what he always does and tax it out of existence. It’d be gone in days, weeks. Gone.”

The senator from Texas tried to beat back speculation of his political aspirations this week in a Facebook post, saying it’s a “continued source of amazement that the simple fact that I am working hard with like-minded Senators to keep my promise is seen as newsworthy and cause for wild speculation.”

But Cruz also made sure to play to his audience Friday night; he referred to Gov. Haley as a “rock star” and sang the praises of Sens. Scott and Graham. He also highlighted South Carolinians who fought in the Battle of the Alamo in 1836.