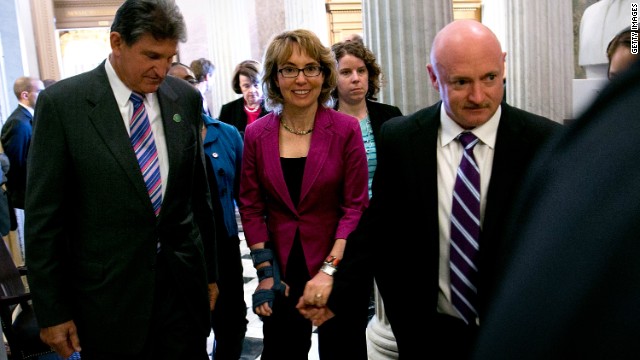 Washington (CNN) – The group founded by former congresswoman Gabrielle Giffords and her husband Mark Kelly raised one million dollars since the defeat of a measure in the Senate expanding background checks two and a half weeks ago, according to Jennifer Bluestein, a spokeswoman for the group.

Giffords, wounded in a Tucson, Arizona shooting in January of 2011, campaigned hard for expanding the checks for purchases at gun shows and online. She has sent several e-mail solicitations since the Senate defeat.

"I'm not going to stop fighting, and I hope you'll commit to kicking off the accountability portion of our campaign to reduce gun violence," she wrote on April 18th.

Americans for Responsible Solutions made the background checks issue a priority and has vowed to grade members of Congress on their votes.

Since the defeat in the Senate, the organization has aired radio ads criticizing Senate Minority Leader Mitch McConnell, R-Kentucky, and Sen. Kelly Ayotte. R-New Hampshire, for voting against the proposal and praising Sen. John McCain, R-Arizona, for voting in support of it.

Meanwhile the well-financed Mayor Bloomberg group, Mayors Against Illegal Guns, announced on Monday a new television ad against Ayotte. The ads will air in Manchester and Boston media markets this week. The ads slam Ayotte for having "Gone Washington" (the ads' title too) in not listening to voters' desires to pass background checks.

Ayotte reacted Monday to some of the ads being run, and the strong questioning she faced at town halls last week, by offering a defense of her record. She did not indicate any change of heart regarding expanding background checks.

In an op-ed published Monday on seacoastonline.com she wrote, "Despite what the false attack ads say, I helped introduce and voted for the Protecting Communities and Preserving the Second Amendment Act, which improves the existing background check system, addresses mental health gaps in the criminal justice system, boosts resources to improve school safety, and criminalizes gun trafficking and straw purchases."

Regarding the bill she voted against, Ayotte wrote, "some of my colleagues want to expand the broken background check system we have now. In my view, we shouldn't be expanding a flawed system. The focus should be on fixing the existing system, which criminals are flouting. We need to make sure we are enforcing current law and prosecuting those who attempt to illegally obtain firearms."

In the op-ed, which was re-tweeted by the NRA, the senator wrote, "I know that there are members of both parties who want to find common ground on this important issue. And my commitment to the people of New Hampshire is that I will continue to try to work across the aisle to prevent violence, enforce and improve our broken background check system, strengthen mental health services, and increase school safety — all while protecting the constitutional rights of law-abiding Americans. Misleading television and radio ads are counterproductive and only help to poison this important discussion."