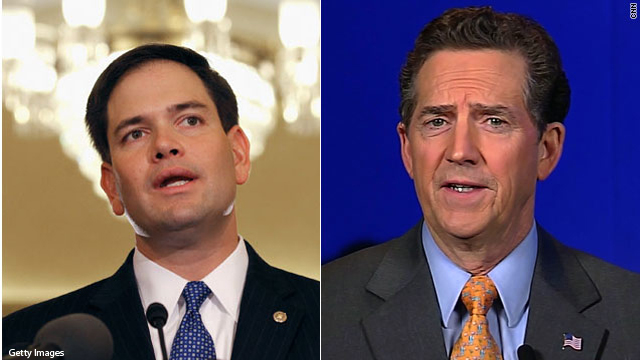 On Monday, DeMint ran roughshod over the Senate immigration reform effort in part spearheaded by Rubio.

"It will cost the American taxpayer trillions of dollars over the next several decades, and it will make our immigration problems worse. We should not repeat past mistakes by providing an amnesty bill," DeMint said as president of the Heritage Foundation, a conservative think tank in Washington.

DeMint's comments came at a news conference on Heritage's new report on the immigration bill's pathway to citizenship component, drafted by Rubio and a bipartisan group of senators known as the "Gang of Eight." While it's no surprise that Heritage stands against the plan–saying it would cost taxpayers $6.3 trillion over the next 50 years–the organization's opposition creates an awkward dynamic between Rubio and DeMint.

Rubio, the junior senator from Florida, largely credits DeMint with his pathway to the Senate. DeMint, then-senator from South Carolina, endorsed Rubio in the summer of 2009, bringing a national spotlight to the former speaker of the Florida House of Representatives. The support helped push Rubio ahead of incumbent Gov. Charlie Crist and on to the GOP nomination.

Rubio acknowledged their friendship Friday in a brief video address at a dinner honoring DeMint in South Carolina. The senator described him as "a great man, someone who believed in me when no one in Washington did and few people in Florida did either."

"He put his credibility on the line in supporting me, and because of him I won the race for the United States Senate," he said, adding the former senator has been a mentor.

DeMint has become known as a conservative kingmaker; several of his Republican primary endorsees in 2010 and 2012 won the nomination and general election. He resigned from his seat at the end of 2012.

"We miss his leadership (in the Senate), but he's now taken on a new task as president of the Heritage Foundation and he's already making his mark," Rubio said in the video. "Congratulations on your new role. I know you'll continue to serve South Carolina and all Americans in this new capacity."

Rubio, who's considered a potential presidential contender in 2016, has been viewed as the Republican face on immigration reform. Depending on how the legislation shapes up, pundits say the bill could help or hurt whatever White House aspirations he may have.

The immigration plan outlines a 13-year path to citizenship for those who entered the country illegally before 2012. It would take 10 years for the majority of undocumented immigrants to get green cards and then another three years to gain citizenship. The comprehensive package also includes provisions for tightening border security and better enforcing current immigration laws.

Creating a legal pathway for the 11 million undocumented immigrants in the country would cost taxpayers a minimum $6.3 trillion over the lifetime of those immigrants, according to the new Heritage report.

The organization released a similar response to the immigration reform effort in 2007, which ultimately failed in Congress.

The report argues the average undocumented immigrant is 34-years-old, has a 10th grade education, and receives $14,387 per household in government benefits in excess of taxes paid.

After the first 10 years, immigrants would become eligible for welfare and health care reform, increasing the deficit to $29,500 per household. When an immigrant reaches retirement age, the report argues, the deficit would go down slightly but remain high at about $22,700 per retiree each year.

DeMint said at the news conference that "no sensible person could read this study" and conclude that the bill would have a positive impact. Comparing the bill to "Obamacare," DeMint chided comprehensive legislation and called instead for a "piece by piece approach."

The plan has already seen sharp criticism, including from other right-leaning organizations. Americans for Tax Reform, led by Grover Norquist, and American Enterprise Institute disagree with the report's findings.

The libertarian-leaning Cato Institute, for example, argues Heritage should count individuals, not households, as many undocumented immigrants are married to U.S. citizens or have citizen children who live in the same households.

Rubio isn't the only DeMint endorsee in the Gang of Eight. The Senate Conservatives Fund, a super PAC created by DeMint, endorsed Republican Jeff Flake in Arizona last year.

Flake responded to the Heritage report on Twitter, criticizing it for ignoring "economic benefits" and "dynamic scoring."

Rubio hasn't responded to the report Monday, but he argued last week the immigration bill is only a "starting point" and could face changes and amendments this week during markup in the Senate Judiciary Committee.

"We share the same goal which is to have a legal immigration system that works. We have some differences in opinion about how we get there," he said. "This is a tough issue."