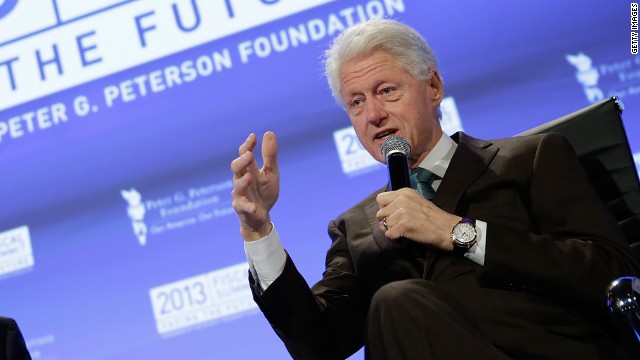 Washington (CNN) - Bill Clinton offered no hints towards his wife’s speculated 2016 presidential run on Tuesday at the Pete Peterson Foundation annual fiscal summit laughing, “Hillary hasn’t mentioned it to me.”

Instead, the former president gave color to Hillary’s post-political life. He noted that the former first lady was enjoying her time writing books and taking an active role in their foundation, the William J. Clinton Foundation.

But while president Clinton joked about his wife finally “having a little fun as a private citizen,” he also gave a warning about the attention already being given to his wife’s political future and the 2016 election calling it, “the worst expenditure of our time,” and a grim example of “our national tendency to attention deficit disorder when it comes to politics.”

Clinton suggested that the focus be shifted towards solving the nation’s current budget problems. "It's frustrating when I think we're majoring in the minors either over the budget debate or going right back to politics as soon as the last election's over, instead of getting into the grimy details where the future of America will be written."

In doing so, he advised President Obama to continue to reach out to Republicans in light of recent changes to once-powerful legislative negotiation tools, such as the banning of earmarks.

“You just have to keep trying to work on it because the truth is in the current climate, it’s not possible to make the kind of individual agreements.” He added, “The White House can’t give things out the way they used to.”