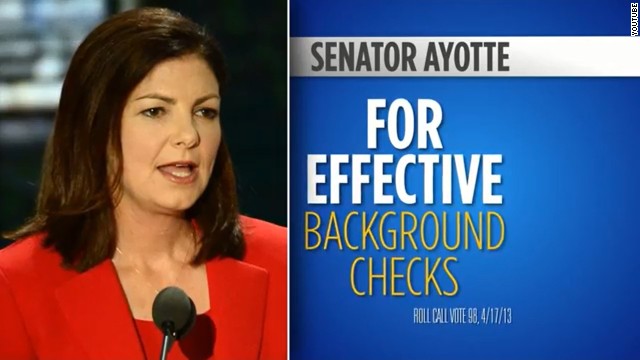 NRA airs 'thank you' ad for Ayotte for gun vote

(CNN) – Sen. Kelly Ayotte, the New Hampshire Republican who's been derided by gun control groups for her "no" vote on expanding background checks last month, is getting some support on the airwaves with a new television spot from the National Rifle Association.

The 30-second ad, airing as part of a $25,000 buy on Manchester-based WMUR, seeks to dispel the notion that Ayotte is opposed to new gun laws.

The ad, along with an op-ed penned by Ayotte, stress the senator's past votes on measures repairing a background check system she regards as broken, as well as making prosecutions easier for criminals who use guns.

The former prosecutor and New Hampshire attorney general drew on her law enforcement experience as proof of her inside knowledge of laws that work.

"It's clear that criminals who attempt to illegally purchase firearms aren't being prosecuted as they should be – and have not been for years," Ayotte wrote on the local website Bedford Patch. "This sends the message to criminals that there won't be any consequences when they try to get their hands on guns."

"Misleading television and radio ads are counterproductive and only help to poison this important discussion," she continued in the essay.

The response from Ayotte and the NRA comes after a spate of attack ads criticizing her for her April 17 vote against a bipartisan measure that would have expanded background checks to gun shows and internet sales.

The group founded by former Rep. Gabrielle Giffords and her husband began airing radio ads accusing Ayotte of "ignoring the will of the people." Giffords was seriously wounded in the Tucson, Arizona shooting in 2011.

A spot from New York City Mayor Michael Bloomberg's Mayors Against Illegal Guns takes a similar approach, charging Ayotte with giving "criminals a pass" – a hard blow for the former state attorney general who ran largely on her tough-on-crime record.

And Organizing for Action, the political outlet formed from Obama's presidential campaign, took out ads online encouraging supporters to "Remind Senator Ayotte: You work for New Hampshire, not the gun lobby."

Wednesday's ad from the NRA isn't the first time the group has praised Ayotte – the gun rights organization praised Ayotte for her "no" vote on background checks in a radio spot late last month. The ad thanked the senator for her "courage to oppose misguided gun control laws that would not have prevented Sandy Hook."