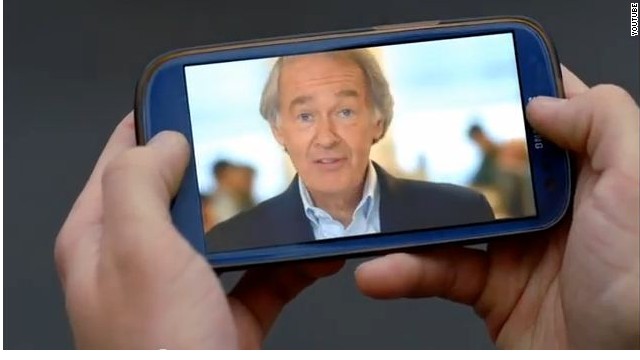 Rep. Ed Markey, the Democratic nominee in the race, is out with his first TV commercial of the general election, touting his efforts to pass the 1996 Telecommunications Act that overhauled existing laws and helped encourage innovation.

"It's hard to believe. But 20 years ago, almost no one had broadband. Smart phones hadn't been invented yet," says Markey, talking from the screen of a smartphone. "Facebook? Skype? Google? The stuff of science fiction."

The spot goes on to say that the Telecommunications Act led to the creation of good jobs, many of them in the Bay State.

"I'm proud Massachusetts is leading this wave of innovation. That's why I approve this message," adds Markey at the end of the ad.

Markey, who's represented the state's 5th Congressional District for 20 terms, will face off on June 25th against Republican nominee Gabriel Gomez, a private equity investor and former Navy SEAL. The winner will serve the final year and a half of the term of longtime Democratic Sen. John Kerry, who stepped down earlier this year to become U.S. secretary of state.

Gomez, who is nearly 20 years younger than Markey, is being touted by the GOP as a fresh face. And Gomez has criticized Markey the past week for not discussing jobs and the economy. The ad appears to push back against such criticism by showcasing Markey as responsible for helping create wave of new technology and social media innovation which has led to the creation of jobs.

"Al Gore invented the internet and it turns out that Ed Markey invented the telephone," Gomez said in a statement responding to the spot. "Ed Markey's first ad starts out by saying 'twenty years ago', just shows you how stuck in the past he is."

A Markey campaign aide said the spot will run on broadcast and cable television in the Boston market, but would not provide further details.

The winner of the June special election will succeed William "Mo" Cowan. Democratic Gov. Deval Patrick appointed his former chief of staff to serve as interim senator after Kerry stepped down.