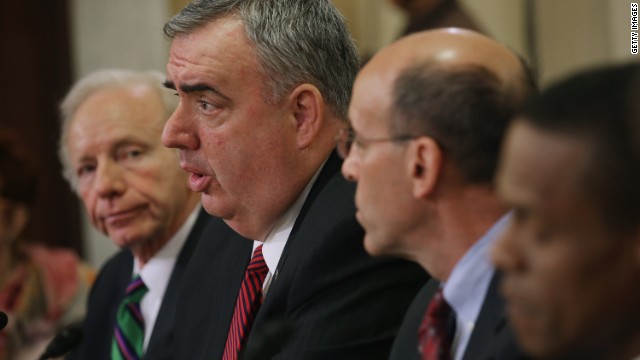 IMMIGRATION BEGINS: The first congressional votes were cast on Thursday on the politically explosive issue of immigration reform. Members of the Democratic-controlled Senate Judiciary Committee started formal consideration of a massive bipartisan bill, debating and voting on the first of more than 300 proposed amendments. – Alan Silverleib

DAN(@DanMericaCNN) & MARK (@PrestonCNN)
What caught our eye today in politics

Boston Police Commissioner Edward Davis argued on Thursday that the Boston Marathon bombing is further proof the United States must increase domestic video surveillance in order to protect soft targets – locations that are not armored or are largely undefended.

In his lengthy written testimony to the House Committee on Homeland Security, Davis said that in order to defend these areas, law enforcement agencies need to “deploy more assets including technology, cameras, undercover officers and specialized units.”

“It is clear after these events and other types of mass casualties such as those which have happened in our nation's schools and colleges that we need to continue to harden soft targets, especially events that lend themselves toward large gatherings celebratory in nature,” Davis wrote.

Surveillance video was crucial in helping to catch the accused terrorists. Investigators solicited video from many of the business around the marathon route and used it to help find the bombing suspects. Davis wrote that the video they used to find the accused bombers was “almost exclusively” from business in the area.

In a pre-butal to civil libertarians, Davis writes that enhanced surveillance “violates no constitutionally protected rights.”

“I strongly support the enhanced ability to monitor public places,” Davis writes. “This monitoring, which been upheld by the United States Supreme Court, violates no constitutionally protected rights but gives police the ability to investigate and effectively prosecute. Images from cameras do not lie. They do not forget. They can be viewed by a jury as evidence of what occurred.”

And a recent CNN/Time Magazine Poll finds that the American people are behind Davis' push for more cameras. Eighty-one percent of Americans polled said they supported expanding cameras surveillance in public places. Only 18% said they oppose it.

That number has increased from a 2001 poll that was conducted shortly after the September 11 terrorist attacks. Then, only 63% of Americans favored increasing camera usage, while 35% opposed it.

According to Popular Mechanics, a science magazine, “there are an estimated 30 million surveillance cameras now deployed in the United States shooting 4 billion hours of footage a week.” LINK
http://www.popularmechanics.com/technology/military/4236865

If public sentiment and the words of Boston's top cop are any signal, that number could be going up.

Leading CNNPolitics: W.H. holds meeting on sexual assault in military
About a dozen members of Congress were invited to meet at the White House Thursday with senior adviser Valerie Jarrett and the first lady's chief of staff Tina Tchen to address the issue of sexual assault in the military, a senior administration official said. – Dan Lothian

Leading Drudge: All Hat No Cattle
Texas Republican Sen. Ted Cruz welcomed President Obama to Texas Thursday, where Obama is scheduled to begin his “Middle Class Jobs and Opportunity Tour,” by highlighting Texas’ job record in comparison with the administration’s. “America is stuck with high unemployment and low GDP growth, so it’s encouraging to see the President coming to Austin to talk about jobs — perhaps he will learn how to create some from the folks who know how,” Cruz said in a statement. – Caroline May for The Daily Caller

Leading Politico: NRA-Gabrielle Giffords fight heats up
The Senate voted down a gun control measure last month, but the fight is just beginning. The National Rifle Association and new pro-gun control groups headed by former Rep. Gabby Giffords and Michael Bloomberg are in an arms race since a background check bill narrowly failed in the Senate last month – ramping up their fundraising, airing attack ads and revving up their grassroots machines. – Anna Palmer

Leading The New York Times: In Senate, Efforts to Reshape, or Derail, Immigration Bill
Lawmakers are considering more than 300 amendments to legislation to overhaul the nation’s immigration laws, keeping an eye out for “poison pills” intended to thwart the bill. – Ashley Parker

- Obama goes to Texas -
PRESIDENT BARACK OBAMA IN A SPEECH TO THE MANOR NEW TECH HIGH SCHOOL IN AUSTIN, TEXAS: “We've got to make America a magnet for good jobs. Second, we've got to help people earn the education and develop the skills they need to do those jobs. And, number three, we've got to make sure that people who are working hard are able to achieve a decent living. All right? That's what we got to focus on.”

Gut Check Full Service… Senate Minority Leader Mitch McConnell in a speech on the Senate floor: “Today the president plans to travel to Austin, Texas. I understand his trip includes a visit to the technical high school and to chat with workers. The idea I presume is to show folks that the White House has once again pivoted to jobs. And if you are someone who is all about the visual then of course putting on a pair of goggles or showing up at a factory is a great way to at least look like you are doing something about job creation. Whether or not that means you are actually getting the job done well that is a different story. An unfortunately robust job creation has been talked about a lot, a lot in this administration even as millions, millions remain out of work or are stuck in part time jobs.”

- Republicans compare current immigration bill to 1986 legislation -
REPUBLICAN SEN. CHUCK GRASSLEY, RANKING MEMBER OF THE SENATE JUDICIARY COMMITTEE, AT A HEARING: “Sponsors of the bill want Americans to believe that people will wait 10 or 13 years until citizenship is granted, they say it will be a tough and expensive road. It would be easier to just go home than go through the process. I disagree with that sales pitch. Unfortunately this bill looks too much like the 1986 bill that failed to take care of the problems we are now trying to solve.”

- Democrats: Don’t kill this immigration bill -
DEMOCRATIC SEN. CHUCK SCHUMER AT A SENATE JUDICIARY HEARING: “We know our present system is broken, we know the status quo is unacceptable, but we also know that there are many who will want to kill this bill. I would ask my colleagues, if you don't agree with everything, no one does – be constructive, we are open to changes but don't make an effort to kill a bill that is the best hope for immigration reform, I believe, that we have had in this country and frankly, the best hope to help the partisan gridlock that has strangled the Senate, the Congress and the country.”

- Kerry approves $100 million more in aid to Syrian rebels -
SECRETARY OF STATE JOHN KERRY AT A SPEECH IN ROME: “President Obama has asked me to authorize an additional $100 million in aid for humanitarian purposes, $43 million of which will be designated directly to Jordan in order to assist, to relieve the burden that they are currently feeling.”

- Comedians joke, show disdain for Sanford -
DAVID LETTERMAN ON HIS LATE NIGHT COMEDY SHOW: “South Carolina had a congressional election yesterday and you remember Gov. Mark Sanford of South Carolina? He got himself into some trouble and he had to go away. Well, he's back and he won the congressional seat and the race yesterday and it's crazy because there's nothing like a guy who stands up for traditional values while he's banging an argentine spit spitfire.”
JAY LENO ON HIS LATE NIGHT COMEDY SHOW: “In a stunning comeback, former South Carolina Gov. Mark Sanford, remember him? He's the guy who told his wife he was going for a hike, then went to Argentina to see his girlfriend. He was then exposed as an unethical lying cheating weasel. He has been elected to Congress where he'll fit right in.”

House passes debt prioritization bill that would only pay some U.S. creditors on time. http://t.co/98CCDekXgh (with @mmcauliff)

My mom has been calling it the "me generation" since I was 13. pic.twitter.com/RNHKSHCcIe

As the SC GOP chair said, there are 2 constants on the tube: “Reruns of ‘Law and Order’ and Lindsey Graham being interviewed" (2/2)

By the middle of next year, Syrian refugees will make up 40% of the population of Jordan according to Foreign Minister Nasser Judeh.

Woodrow Wilson gave his mother the ultimate present on this day in 1914: He issued a presidential proclamation that officially recognized the first national Mother’s Day.

Since Wilson’s first proclamation it has become customary for a president to issue a Mother’s Day proclamation. In 2011, President Barack Obama issued a proclamation that spoke at length about the challenges facing women who are raising a family.

The movement to get the holiday recognized started in 1912 with the establishment of the Mother’s Day International Association headed by Anna Jarvis of Webster, West Virginia. Interestingly enough, by the 1920s, Jarvis has become disgusted with the commercialization.

“A printed card means nothing except that you are too lazy to write to the woman who has done more for you than anyone in the world. And candy! You take a box to Mother — and then eat most of it yourself. A pretty sentiment,” she was known to tell people.