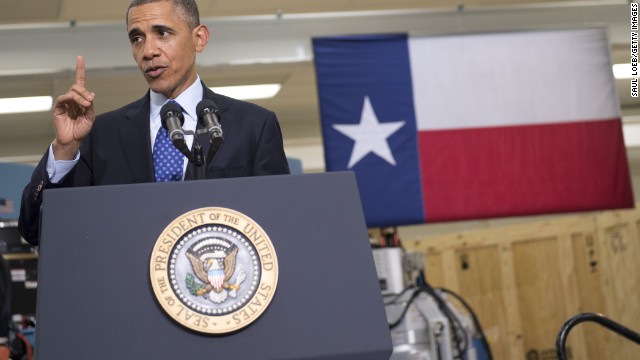 On a one-day trip the White House called a “Middle Class Jobs and Opportunity Tour,” the president made four separate stops.

He visited with groups of students, local residents, entrepreneurs and tech professionals and toured a high school robotics classroom. He also ate lunch with workers and watched demonstrations at a tech start-up incubator.

Obama’s two speeches were more policy prescriptions than campaign rallies. The rhetoric was less soaring, the crowds were tamer and the message was partly aimed at pushing back against pessimistic perceptions of the U.S. economy, which has recovered slowly from recession.

“You might not know this because if you listen to all the doom and gloom in Washington, in politics, and you’re watching cable TV sometimes, you might get kind of thinking nothing is going right,” the president said, addressing a crowd of 400 students, teachers and local officials at Manor New Technology High School. “But the truth is there’s a lot of reasons for us to feel optimistic about where we’re headed as a country, especially after all the tough times that we’ve been through over the last several years.”

On a conference call with reporters, Deputy White House Press Secretary Josh Earnest said the president’s trip to Austin was intended to build on the themes he laid out in his State of the Union address in February: job creation, educating the American work force and expanding the middle class.

“[The trip is] an opportunity for the president to illustrate what he views as priorities for expanding the middle class,” Earnest said.

Gene Sperling, director of the president’s National Economic Council, added that middle class job creation has been a constant focus of Obama’s economic policy. But the U.S. economy, he added, is a “story that is still being written and is dependent on policies.”

With the right policies, Sperling said the country will be “on a path to a manufacturing renaissance.”

Those policies include two executive actions announced as part of the trip. One creates three new Manufacturing Innovation Institutes and a second ordering newly released government data be made digitally available for free.

The manufacturing institutes will be partnerships between the business community, higher education and the federal government geared toward the development and production of new technologies.

Already, the Obama administration has created one such institute in Ohio, and it will encourage states to compete for the right to host one of the new ones.

As for why the president chose Austin as the site of his renewed push for growth-centered policies, the president said the area is representative of a lot of innovative communities around the country.

After meeting the president on the tarmac in Austin, Texas Governor and former GOP presidential candidate Rick Perry was more boastful about why Obama chose his state to visit.