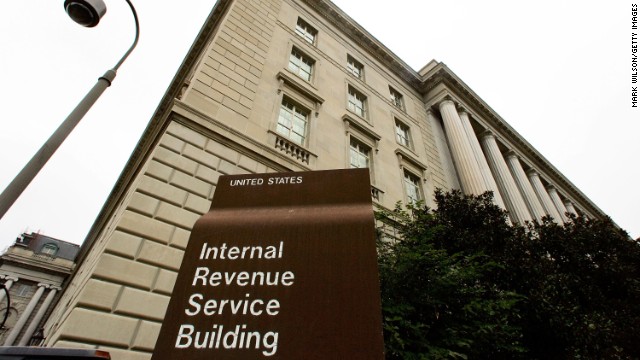 Further, an early timeline of events compiled by the inspector general and obtained by CNN indicates the agency's practice of singling out conservative groups began as early as March 2010, and in July of that year, unidentified managers within the agency "requested its specialists to be on the lookout for tea party applications." In August, specialists were warned to be on the lookout for "various local organizations in the tea party movement" applying for tax-exempt status. The specific criteria would change several times over the next two years, according to a portion of the report.

An IRS official on Friday admitted the agency made "mistakes" in the last few years with tax-exempt status applications and specifically those submitted by groups with the words "tea party" or "patriot" in their names. Multiple conservative groups have said their applications were delayed and returned with lengthy requests for supporting materials, sometimes including website printouts and lists of guest speakers.

The Treasury Department inspector general for tax administration launched an audit of the agency's practices, and spokesman David Barnes said the report is being finalized and is expected to be released this week.

Barnes said the review was requested by Rep. Darrell Issa, chairman of the House Committee on Oversight and Government Reform, and focused on programs and operations. An audit is separate from an investigation, which would assess wrongdoing such as violation of law or policies.

President Barack Obama's spokesman Jay Carney said Saturday that Obama believes the government should be staffed with "the very best public servants with the highest levels of integrity" and that "based on recent media reports, (the president) is concerned that the conduct of a small number of Internal Revenue Service employees may have fallen short of that standard."

"If the Inspector General finds that there were any rules broken or that conduct of government officials did not meet the standards required of them, the president expects that swift and appropriate steps will be taken to address any misconduct," he said in a statement.

Lois Lerner, director of tax-exempt organizations for the IRS, publicly admitted on Friday for the first time that agents used the keywords "tea party" and "patriot" to flag applications for further review, but she stressed that was done as a "shortcut" for picking the applications to review, not out of "political bias."

The IRS commissioner at the time said at a March 2012 congressional hearing that his agency did not target conservative groups for political reasons.

"I can give you assurances. We pride ourselves in being a nonpolitical, nonpartisan organization," Commissioner Douglas Shulman said. "There is absolutely no targeting. This is the kind of back and forth that happens when people apply for 501(c)(4) status."

The congressional source familiar with the inquiry understood that Lerner knew of the targeting in 2011 but sent letters to Congress earlier this year without disclosing the extent of her knowledge.

Lerner said on the Friday conference call that she "did not feel comfortable answering" as to when senior IRS officials became aware of the situation. She also said she could not give a time frame for when the IRS began looking into complaints.

She said the IRS has implemented changes to prevent similar mistakes in the future but could not say that any IRS employees had been disciplined.

The IRS said Sunday that the timeline in the inspector general's report was accurate, but that it "does not contradict" Shulman's March testimony.

"While Exempt Organizations officials knew of the situation earlier, the timeline reflects that IRS senior leadership did not have this level of detail," the statement from the IRS read. "The timeline supports what the IRS acknowledged on Friday that mistakes were made. There were not partisan reasons behind this."

The applications in question were processed by an office in Cincinnati that handles most applications for 501(c)(4) status and had seen the number of applications rise sharply between 2010 and 2012, Lerner said.

Some 75 conservative groups, flagged by agents because of their names, were among 300 groups singled out for this additional scrutiny, she said. The agency received more than 3,400 applications for 501(c)(4) status in 2012.

"They did pick the cases by names and that's absolutely inappropriate and not the way we should do things," she said, though stressing it was done as a "shortcut," not out of political bias.

Officials with some groups subjected to the scrutiny said they would have had to supply thousands of documents, stacked inches thick, to comply with the requests. Some chose not to, saying the agency was attempting to bury them in paperwork.

Tax-exempt groups are allowed to advocate for causes so long as their primary activities are dedicated to "social welfare," according to IRS rules. When an advocacy case is filed for further review, the IRS tries to determine if the group plans on sticking by that calculus.

IRS scrutiny of conservative applications appears to have begun well before the groups had any idea they were in the spotlight.

The timeline prepared by the inspector general and obtained by CNN redacts events before March 2010 as well as several between then and July 15, 2012, when the timeline concludes. But between the omitted content is a series of events showing what was happening inside the agency.

Initially, unidentified managers from the Determinations Unit of the IRS searched for "applications involving political sounding names (such as ) 'We the People' or 'Take Back the Country.'" In mid-March 2010, the agency identified 10 tea party-related cases, and by April 5, there was a list of 18, though "three had already been approved as tax exempt," the report read.

In late April and May, specialists from the Technical Unit were involved, and on June 7, the "Determinations Unit began training its specialists on emerging issues to watch for, including an emerging issue referred to as Tea Party Cases."

That summer, an e-mail and a "be on the lookout" note were sent to employees that included a "coordinator contact for the cases."

Over the next year, some responsibilities shifted and new staff joined the effort.

The timeline suggests the first hesitation within the agency regarding the process came in June 2011, when "the acting director, Rulings and Agreements, commented that the criteria being used to identify tea party cases may have resulted in over-inclusion." But part of that entry, as well as the preceding one, are redacted from the timeline.

Later that month the director of exempt organizations was briefed on the efforts, and the criteria for evaluating applications were adjusted, one of several times the criteria would be tweaked. A guide sheet for handling applications was developed, and in September, "A Technical Unit specialist reviewed the list (of applications) to determine if any cases could be closed on merit or closed with an adverse determination letter," meaning the application would be accepted or denied.

The timeline continues to show incremental changes to the criteria, additional reviews and the involvement of counsel after the entry labeled "February-March 2012."

By March of 2012, Congress was asking questions of the IRS. That month, Shulman denied the agency targeted groups for political reasons at the congressional hearing.

There was also an exchange of letters involving Capitol Hill, Shulman and Lerner.

"News reports ... indicate that the IRS effort lacks balance, with conservative organizations being the target of the IRS's scrutiny," Issa wrote to Lerner in a March 27, 2012, letter obtained by CNN. He noted a Capitol Hill news outlet had "contacted several liberal groups ... (and) none had received the recently-sent questionnaire."

Lerner responded that the IRS sets aside "applications that require further development by an agent in order to determine whether the application meets the requirements for tax-exempt status.

"... The revenue agent uses sound reasoning based on tax law training and his or her experience to review the application and identify the additional information needed to make a proper determination of the organization's exempt status," she wrote deeper in the eight-page response.

She did not disclose in that letter that the IRS targeted conservative groups, even if for nonpolitical reasons.

CNN's Athena Jones and Ashley Killough contributed to this report.