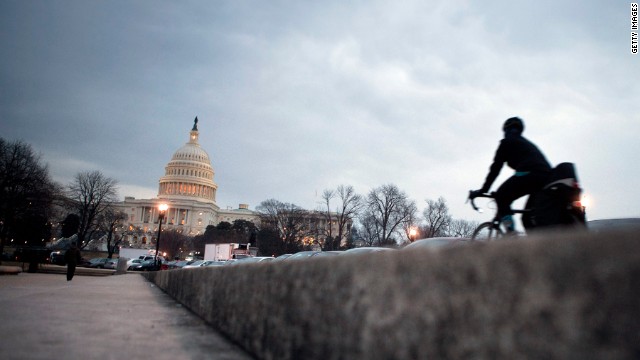 DEVELOPING: CONGRESSIONAL HEARINGS ON IRS START FRIDAY: The House Ways and Means Committee will hold a hearing Friday on the Internal Revenue Service's admission it applied extra scrutiny to conservative groups applying for tax exempt status. The acting commissioner of the IRS and the inspector general for the Treasury Department will be the only witnesses at the hearing. – CNN’s Dana Bash

Leading CNNPolitics: GOP walks fine line with Clinton over Benghazi
Republicans continued to put Hillary Clinton at the center of their inquest into last September's attack in Benghazi, claiming Sunday the former secretary of state wasn't assigned enough blame in an independent probe of the incident. – Kevin Liptak

Leading CNN.com/Opinion: Did political spin hide the truth of Benghazi?
Ever since Watergate became the shorthand for a government run amok, the political cliché of our time has been about the political lesson of that era: That the coverup can be worse than the crime. Apply that cliché to Benghazi - and questions about the motive for removing the terror link from talking points about the Libyan attack in the heat of an election. – Gloria Borger LINK

Leading Drudge: Did Press Make Him Cry?
A tear runs down the face of U.S. President Barack Obama as he answers questions about the attack on the U.S. embassy in Benghazi, Libya while Britain's Prime Minister David Cameron listens during a joint news conference in the East Room of the White House in Washington, May 13, 2013. – Yahoo

Leading HuffPo: Obama On IRS Scandal: 'I Have Got No Patience' For It
President Barack Obama strongly condemned officials at the Internal Revenue Service for singling out conservative groups during the lead-up to the 2012 elections. – Sam Stein

Leading The New York Times: Obama Scoffs at Libya Outcry but Vows to Act on I.R.S. Audits
President Obama on Monday rejected as “a sideshow” criticism of his handling of the attacks in Benghazi, Libya. On the scandal at the revenue agency, he said the singling out of certain groups, if true, was “outrageous.” – Michael D. Shear

Check your wallet: what major change was made to U.S. currency on this day in 2003?

MARK (@PrestonCNN)
What caught our eye today in politics

Here in the nation’s capital, it is easy to talk in macro terms when describing how the Heartland is hurting in these economic times. After all, the Heartland is a nameless, faceless description used to describe “Anytown USA” in very broad terms. Politicians often refer to the Heartland in speeches as does the media in its reporting – including Gut Check.

But we need to look no further than 500-plus miles northwest of Washington to really see how bad things are in a major city, yes, in the Heartland.

Detroit is in trouble.

Deep, deep trouble and there are no easy answers as our CNNMoney colleague Chris Isidore writes today: “The Detroit city government is weeks away from running out of the cash it needs to operate, according to an initial report from the emergency manager overseeing its finances.”

What! A city on the verge of bankruptcy? Isidore writes that Kevyn Orr, the bankruptcy attorney appointed by the state, doesn’t use the term “bankruptcy” in his report but he is not ruling it out.

"No one should underestimate the severity of the financial crisis," Orr said in a statement. "The path Detroit has followed for more than 40 years is unsustainable and only a complete restructuring of the city's finances and operations will allow Detroit to regain its footing."

This is a story worth reading – just to be able to put a name and a face to a city in the Heartland struggling, gasping, in these difficult economic times. It definitely caught our eye.

- Obama’s first comments on IRS targeting conservative groups -
PRESIDENT BARACK OBAMA AT A NEWS CONFERENCE MONDAY: “If in fact IRS personnel engaged in the kind of practices that have been reported on and were intentionally targeting conservative groups, then that's outrageous and there's no place for it. And they have to be held fully accountable, because the IRS as an independent agency requires absolute integrity and people have to have confidence that they're applying the laws in a non-partisan way.”

- Conservatives want to know extent of IRS knowledge -
KELI CARENDER OF THE TEA PARTY PATRIOTS ON CNN’S “STARTING POINT”: “We need to know how did this start? Who started it? Who knew what? And when did they know it? How far up does this go? Does it go up all the way into Treasury? Does it go up into the administration? Who is a part of this? How are these decisions made? And what is going to happen to the people that did it? If there are no consequences for people who abuse their power like this then it's not going to stop.”

Eric Cantor ‏(@GOPLeader)
I’m grateful justice has been served. Many families still recovering from the horror & pain. Pray for them and for all human life. #Gosnell

James Hohmann ‏(@jameshohmann)
Joe Biden at UPenn: "Don't listen to the cynics...they were wrong about my generation & they're wrong about yours." http://goo.gl/2YUhg

Lindsey Graham ‏(@GrahamBlog)
If the Judiciary Committee tries to redefine marriage in the immigration bill they will lose me and many others.

OpenSecrets.org (‏@OpenSecretsDC)
With focus on IRS treatment of politically active nonprofits, here's our data on these secretive groups: http://bit.ly/O8QZhL

jmartpolitico ‏(@jmartpolitico)
How to save USPS: members of Congress can't issue press releases about "sending letters" unless they pay for the postage& actually mail

The first U.S. currency design to include a broad array of colored ink debuted on this day in 2003. The new $20 bill included blue, green and peach background tones and was an effort to prevent counterfeiting of the currency. It was followed by designs of the $50 and $10 bills, which also incorporated colors.

But this was not the first time U.S. bills included a colored background. Twenty dollar notes were produced for a short time starting in 1905 with a gold background. The seal and serial number was printed on those bills in red.

The dollar was adopted as the official U.S. monetary unit in 1785 and the first paper currency in what is now the United States was printed in Massachusetts Bay Colony in 1690.

Congratulations to Talmadge (@taleast) for correctly answering today’s trivia question first. We’ll have a new question for you to try your hand at tomorrow.