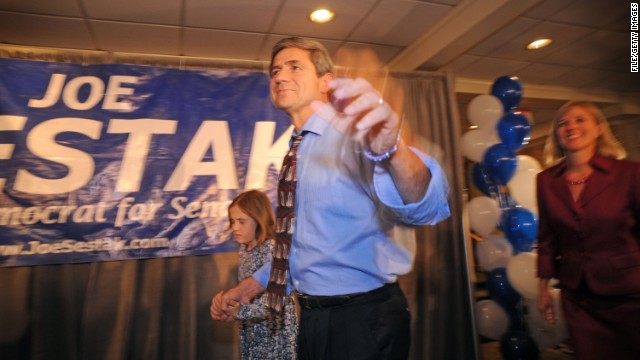 The Pennsylvania senatorial race is in 2016, making this an unusually early declaration, but Sestak said that the formation of the exploratory committee is not just for his Senate bid, but also to address problems that currently affect Pennsylvanians.

Sestak told CNN's Political Editor Paul Steinhauser on Tuesday that the Senate leadership's habit of responding to crises instead of acting prior to prevent them is the biggest problem facing Pennsylvanians today and "prevents local state leaders from doing the best they can to serve people."

In making his announcement, Sestak said that he will not be running in the 2014 Pennsylvania gubernatorial race against Republican incumbent Tom Corbett but, "I'll fully support the Democratic nominee for governor. I think that's a priority."

The former 3-star Navy admiral was considered to be a leading candidate for the 2014 Pennsylvania gubernatorial race, with an April 2013 Quinnipiac University poll showing Sestak up 14% in favor of winning against the current Pennsylvania Governor Tom Corbett.

The announcement of his exploratory committee also includes the launch of Sestak's new website, JoeSestak.com, and a video shot outside Independence Hall. In the video posted on the website's donation page, Sestak emphasizes a lack of accountability for congressional leaders today.

"Today too few leaders are willing to be accountable for advancing our dream. When I left the Navy and entered Congress, I saw how this lack of accountability by our leaders was losing the trust of the American people. If you want to regain that trust, restore respect across the political divide to advance America, we need leaders who are both honest and accountable to the people for the American dream," Sestak said in the video.

Sestak ran unsuccessfully for Senate in 2010, beating incumbent Senator Arlen Specter in the primary but losing narrowly in the general election to Republican Pat Toomey. He said his motivation to run again in 2016 comes from his experience attending hundreds of local events across the state, such as veteran's posts, chambers of commerce, and lions clubs, speaking with constituents and learning that above all, "Pennsylvanians want a change in Senate leadership."

Sestak told CNN, "Pennsylvanians want leaders that don't wait until there's a crisis to resolve our challenges. They want a leader that has their back every day. And unfortunately in the Senate. . . our Senators tend to confront problems only when there is a crisis. . .rather than doing what should have been done before it occurred."

The former Pennsylvania representative was the highest ranking military official ever elected to Congress. According to his bio, Sestak served as President Clinton's director for defense policy on the National Security Council in the White House, the first director of the Navy's anti-terrorism unit after 9/11, and the deputy chief of naval operations responsible for the Navy's five year $350 billion warfare requirements.

Sestak's campaign is officially filed with the Federal Election Commission as an exploratory committee titled, "Friends of Joe Sestak,"