(CNN) - Republicans using the Internal Revenue Service scandal to slam health care reform have a new twist in their argument.

Sarah Hall Ingram, who heads the implementation of the Affordable Care Act at the IRS, formerly led the agency's tax exempt/government entities division, the same division that's now taking heat for targeting conservative groups in the past few years.
END_OF_DOCUMENT_TOKEN_TO_BE_REPLACED

Obama to name Giffords to Fulbright board

Giffords, who resigned from Congress after being wounded in a 2011 mass shooting, was awarded a Fulbright Scholarship to study in Chihuahua, Mexico in 1996.
END_OF_DOCUMENT_TOKEN_TO_BE_REPLACED

(CNN) - The House of Representatives passed a measure to repeal Obamacare entirely on Thursday - a move the GOP-led chamber has done twice already.

But the latest scandal involving the IRS, one of the key agencies charged with enforcing the health care law, is adding fuel to the political fire over the controversial new law.
END_OF_DOCUMENT_TOKEN_TO_BE_REPLACED

Washington (CNN) - After months of intense negotiations, a bipartisan U.S. House group has reached an "agreement in principle" on immigration reform, according to Rep. Mario Diaz-Balart of Florida, one of the GOP members of the group.

A Democratic aide familiar with the discussions confirmed that all the members signed on and told CNN both Democrats and Republicans "will now run the whole package past their respective leadership and colleagues" and aim to formally introduce legislation at the beginning of June.
END_OF_DOCUMENT_TOKEN_TO_BE_REPLACED

(CNN) – Sen. Rand Paul continued his blitz against Hillary Clinton, arguing Thursday the former secretary of state was involved in changing the Benghazi talking points, despite recently-released e-mails indicating she did not have a direct role in the matter.

The Republican senator of Kentucky–who’s considering a 2016 presidential bid–said that because her spokeswoman at the time, Victoria Nuland, was engaged in the editing process for the talking points, then Clinton must be implicated, as well.
END_OF_DOCUMENT_TOKEN_TO_BE_REPLACED

Ayotte: I won't back down

Washington (CNN) – While much of Washington's attention is on the various controversies involving the IRS, the Benghazi attack and the Justice Department subpoena of the Associated Press, those on both sides of the gun control debate are engaged in trying to sway public opinion.

Much of the focus right now is on New Hampshire Republican Sen. Kelly Ayotte, the only member of the U.S. Senate from New England to vote against the proposal pushed by her colleagues, Joe Manchin (D-West Virginia) and Pat Toomey (R-Pennsylvania), to expand background checks for gun purchases.
END_OF_DOCUMENT_TOKEN_TO_BE_REPLACED

(CNN) - Joseph Grant plans to retire June 3 from the Internal Revenue Service, where he heads the agency's tax exempt/government entities division, according to an internal memo for IRS employees that was obtained by CNN.

He is the second top IRS official to announce his imminent resignation as the agency grapples with a scandal involving its targeting of conservative groups.

Washington (CNN) –– Internal Revenue Service chief Steven Miller may have been among the first people to be blamed for a scandal now consuming the agency and buffeting the Obama administration, but at least one powerful House Republican is confident he won't be the last.

"This isn't just going to end up being just one person's responsibility," House Ways and Means Committee Chairman Dave Camp told CNN on Thursday in an exclusive interview.

Washington (CNNMoney) - The Internal Revenue Service group under fire in the current scandal was overworked, understaffed and lacked a layer of experienced middle managers, according to two former IRS employees.

"You have agents muddling through, trying to do their best with the law they're given, the workload they're given and with the folks they have at that office," said former IRS attorney Philip Hackney, who worked in Washington from 2006 to 2011, and advised Lois Lerner, director of the unit that approved applications from groups seeking tax-exempt status. 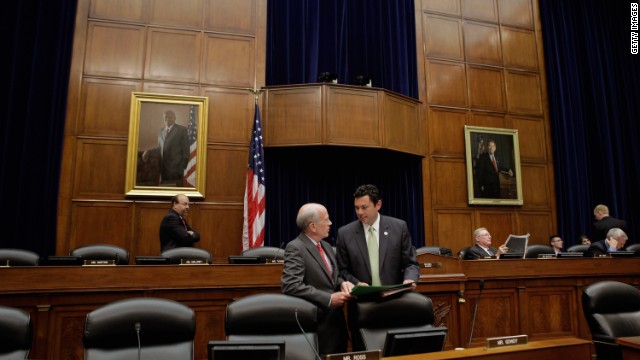 Washington (CNN) - Former Internal Revenue Service Commissioner Douglas Shulman, who was at the helm of the IRS during most of the period agents were targeting conservative groups, will testify before the House Oversight Committee Wednesday, a House GOP aide tells CNN.

Shulman – no longer in the government – agreed to attend voluntarily.
END_OF_DOCUMENT_TOKEN_TO_BE_REPLACED