Washington (CNN) – After some of their political groups were targeted for extra scrutiny by the Internal Revenue Service, members of the tea party say they feel a new justification for their claims of government overreach and big government.

Speaking at a rally on Capitol Hill Thursday, Rep. Michele Bachmann said the IRS's actions – which resulted in the resignation of the acting commissioner of the agency – could reflect a greater undercurrent of political misdeeds being carried out by the federal government. She specifically cited the president's health care law as a measure rife with opportunities to play political games.
END_OF_DOCUMENT_TOKEN_TO_BE_REPLACED 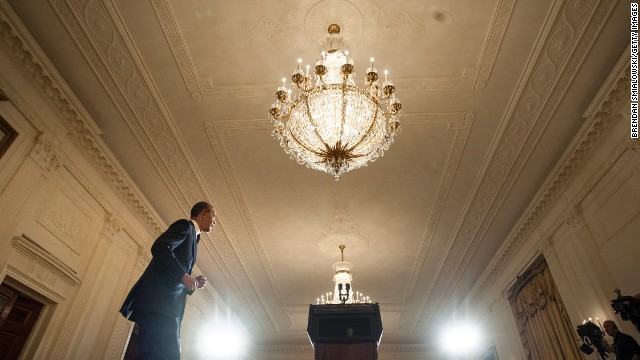 Washington (CNN) - President Barack Obama is counter-punching furiously to prevent a series of potential scandals from overwhelming his second-term agenda.

With a trio of moves, the suddenly beleaguered president fought back on Wednesday against Republican attacks that his administration defied accountability for controversies involving IRS targeting of conservative groups, the secret subpoena of journalists' phone records and erroneous talking points in the immediate aftermath of last year's Benghazi terrorist attack.

(CNN) - Republicans on the Senate Environment and Public Works Committee, who last week boycotted a committee vote on Gina McCarthy to be President Obama's administrator of the EPA, will attend another vote scheduled Thursday after getting assurances from the agency that it will answer several questions posed by Republicans, a GOP committee aide told CNN.

EPA "committed to make some effort to follow up on the EPW Republicans five transparency requests," said Luke Bolar, an aide to Sen. David Vitter of Louisiana, the top Republican on the committee.
END_OF_DOCUMENT_TOKEN_TO_BE_REPLACED

Labor nominee voted out of committee on party line vote

Perez has come under heavy fire from Republicans for his actions when he headed the Civil Rights Division at the Department of Justice earlier in the Obama administration. Last week, Republicans blocked the committee vote by invoking a rarely used procedural tactic, which angered Senate Democrats.

Now that he is voted out of committee, the full Senate must consider his nomination, which may be scheduled next week. A GOP filibuster – which would require 60 votes to break - appears likely.

McAuliffe, a former chairman of the Democratic National Committee and major party fundraiser, had the support of 43% of registered voters in the Quinnipiac University survey, while Virginia Attorney General Cuccinelli was at 38%. That margin was just inside the poll's sampling error.
END_OF_DOCUMENT_TOKEN_TO_BE_REPLACED

The official, acting IRS Commissioner Steven Miller, was aware employees were targeting conservative groups in May 2012, according to the agency.

(CNN) - In a letter to Rep. Darrell Issa exclusively obtained by CNN, the co-chairmen behind an independent review of September's deadly attack in Benghazi, Libya, expressed irritation over the House Oversight Committee chairman's portrayal of their work and requested he call a public hearing at which they can testify.

"The public deserves to hear your questions and our answers," wrote former U.S. ambassador, Thomas Pickering and retired chairman of the Joint Chiefs of Staff, Adm. Mike Mullen. Both are co-chairmen of the Accountability Review Board that was convened to investigate the September 11 attack.

A suicide car bomber targeted a convoy of coalition forces in the Afghanistan capital on Thursday morning, killing six civilians, the interior ministry said. The fatalities included two children and an additional 30 people wounded, said Sediq Seddiqi, a spokesman for the ministry. Maj. Bryan Woods, a spokesman for the International Security Assistance Force, confirmed the attack. He declined to release the number of casualties, saying he wanted more time. An investigation is under way, both by the coalition forces and the Afghan officials, Woods said. Insurgent group Hezbe Islami of Gulbuddin Hekmatyar claimed responsibility for the attack.

Possible tornadoes ripped through north Texas on Wednesday night, killing at least six people and injuring more than 100 others, officials said. The fatalities occurred when the storm struck a Habitat for Humanity neighborhood in the Granbury area, Hood County Sheriff Roger Deeds said. There were about 120 homes in the neighborhood and most of them were destroyed. Fourteen people still missing and the death toll could rise, according to Deeds. About 100 people were injured, said Matt Zavadsky, a spokesman for MedStar Mobile Healthcare.