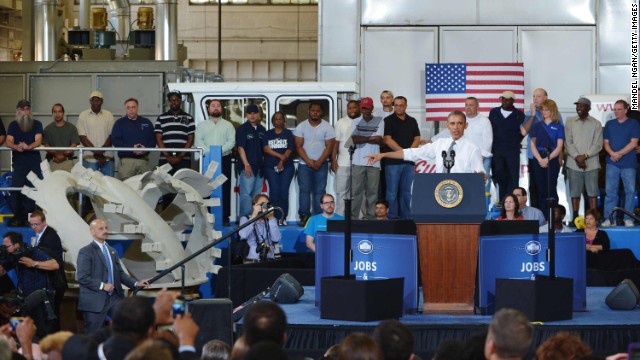 Obama: We can't get distracted

Baltimore (CNN) – After a week where the Obama administration appeared knocked off course by a number of controversies, President Barack Obama sought to get back on track Friday by focusing on his jobs agenda.

"I know it can seem frustrating sometimes when it seems like Washington's priorities aren't the same as your priorities…Others may get distracted by chasing every fleeting issue that passes by, but the middle class will always be my number one focus. Period," he said during a campaign-style stop at a dredge manufacturing company in Baltimore, the second leg of what the White House has dubbed his "Middle Class Jobs and Opportunity Tour."
END_OF_DOCUMENT_TOKEN_TO_BE_REPLACED

(CNN) - A federal judge on Friday ordered a preliminary injunction blocking an Arkansas law that would ban abortions after 12 weeks of pregnancy, a court official told CNN on Friday.

The official spoke to CNN on condition of anonymity, citing department policy.

He's already said he's eyeing a run, and has taken steps signaling he'll jump into the race, including publishing a detailed policy document about his plans for the city.
END_OF_DOCUMENT_TOKEN_TO_BE_REPLACED

Washington (CNN) - A huge increase in workload, rather than deliberate targeting, led to "foolish mistakes" and the political discrimination in the Internal Revenue Service cited by an inspector general's report, the agency's outgoing commissioner said Friday.

The testimony by Steven Miller, who was forced to announce his resignation this week as acting IRS commissioner, came at the first congressional hearing on the matter that has put President Barack Obama's administration on the defensive. 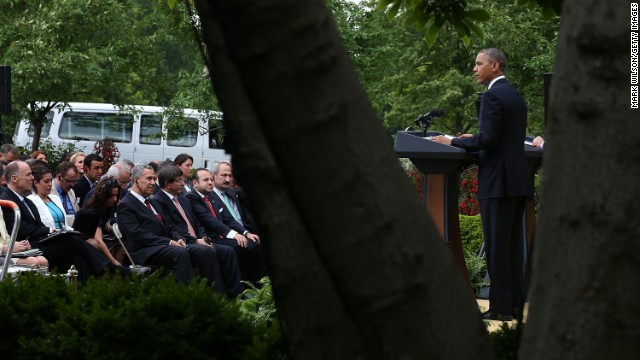 Are you paying attention to the IRS and Benghazi controversies?

Washington (CNN) - Around half the public is tuned in to the controversies that are consuming the nation's capital, according to a new poll.

But the Gallup survey indicates party affiliation is playing a role in how closely people are keeping an eye on the controversies. And according to the poll, most say further investigation is needed.
END_OF_DOCUMENT_TOKEN_TO_BE_REPLACED

But the owner of the company, Peter Bowe, has another idea for getting Americans to work: approve the Keystone XL oil pipeline, a project Republicans say would create jobs and foster energy independence but some Democrats argue would pose serious environmental risks.
END_OF_DOCUMENT_TOKEN_TO_BE_REPLACED

A North Texas community forged ahead in a massive cleanup, and the search for the missing continued Friday from 16 tornadoes that ripped through the area. That search for seven people still missing is still active, a local sheriff said. "We're going to keep on looking," Hood County Sheriff Roger Deeds said Thursday. "We're not going to give up until every piece of debris is turned over."  The seven-hour onslaught of twisters, 16 confirmed so far according to the National Weather Service, battered the area Wednesday, turning neighborhoods into rubble and leaving six people dead.

Investigators have not ruled out an intentional fire being behind explosions at a fertilizer plant in the small town of West that left 15 people dead, the Texas fire marshal said Thursday. State Fire Marshal Chris Connealy said investigators were unable to rule out three possible causes, including a spark from a golf cart, an electrical short or an intentionally set fire. "The cause cannot be proven to an acceptable level," Connealy told reporters.