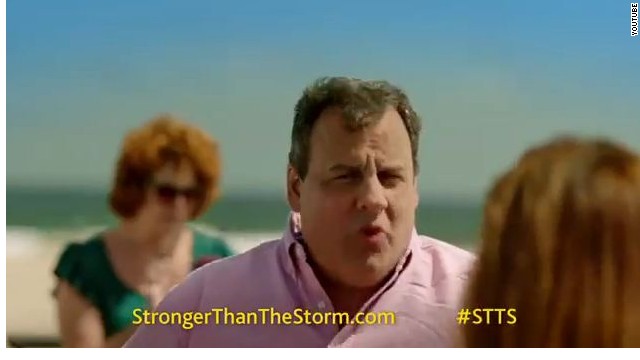 (CNN) - New Jersey Democrat and gubernatorial hopeful Barbara Buono released a new web video Monday–but it's not the ad getting the most attention in the Garden State these days.

Republican Gov. Chris Christie is taking heat for his role in a new tourism ad for his state following the devastating impact of Superstorm Sandy.

The television commercial, released last week, is part of a $25 million tourism campaign using federal funds to promote the Jersey Shore this summer.

So what's the problem?

Christie, who's running for re-election this year, makes a cameo in the 30-second spot, prompting some critics to say the potential 2016 presidential contender is using federal taxpayer dollars to boost his political image.

After Congress delayed sending tens of billions in relief aid to Northeastern states at the beginning of this year, Christie went on a blistering critique of Washington lawmakers during a now-famous press conference.

"We respond to innocent victims of natural disasters, not as Republicans or Democrats, but as Americans," he said, adding politics was trumping the needs of U.S. citizens. "For me, it was disappointing and disgusting to watch."

The Star-Ledger in New Jersey noted in a biting editorial Sunday that it's not the people who are most bouncing back from the story who get to star in the tourism ad–it's the state's governor, who already gets plenty of air time and positive ratings as the public face of state recovery efforts.

"(It's) not the small business owners working to get back on their feet. Not shore residents trying to rebuild, or their kids," the editorial stated. "Not even celebrities, as in the 'Fall in Love with Louisiana All Over Again ad campaign after Hurricane Katrina, which featured local stars who participated for free. Were Bruce Springsteen and Jon Bon Jovi simply unavailable?"

Christie may face more questions Monday when he makes a media appearance on the Lavallette Boardwalk.

The governor and his family appear in the ad for about five seconds at the end, as they sit on the shore and declare the state is "stronger than the storm."

Christie has argued in defense that "there's nothing political about the ads" and his aides point out that the commercials won't even be running in New Jersey itself, according to the Star Ledger.

But the editorial asked that "given Christie's presidential ambitions, is it any surprise that he'd use federal relief dollars to splash his face all over TV in New York, Pennsylvania, Maryland and Canada – in addition to ads in print, on the radio and Internet?"

Colin Reed, a spokesman for the governor, told CNN the move was a creative decision by the Stronger Than The Storm campaign to include Christie and his wife in the ad.

"They are in a uniquely qualified position to tell a very wide audience beyond New Jersey that our state and our Shore is open for business," he said.

Christie saw a surge in his poll numbers during the aftermath of the storm, a popularity that he's maintained in the last six months.

Recent surveys also indicate the governor has a strong advantage over his Democratic opponent in this year's gubernatorial race.

In Buono's new web ad, the state senator takes a light-hearted approach in telling voters how to say her often-mispronounced name. She has been vastly outspent by Christie in ads.