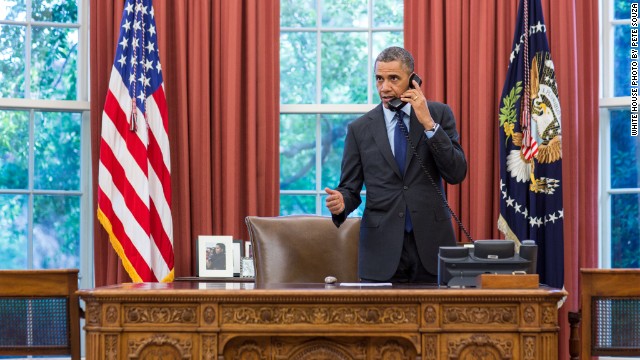 Washington (CNN) - President Barack Obama told Oklahoma Gov. Mary Fallin Monday the resources of the federal government stand ready to assist her state as it recovers from a devastating set of storms that pounded an area near Oklahoma City Monday.

The Federal Emergency Management Agency has deployed an incident team to the state, Obama told Fallin, and more federal resources are on standby as the extent of the damage becomes clearer.

“The people of Oklahoma are in his and the First Lady’s thoughts and prayers and, while his team will continue to keep him updated, he urged her to be in touch directly if there were additional resources the Administration could provide,” the White House said.

Earlier, an official said Obama and members of his administration are "closely monitoring" the storms that hit the town of Moore, leaving widespread damage.

Lisa Monaco, the president's security and counterterrorism adviser, notified Obama of the storm, according to a White House official. The official said he was continuing to receive updates as more information is derived from on-the-ground reports.

Janet Napolitano, the homeland security secretary, spoke with Oklahoma Gov. Mary Fallin by telephone to ensure the state's needs were being met, and to "make clear that at the President's direction the Administration and FEMA stand ready to provide all available assistance in response to the severe weather," the White House official said.