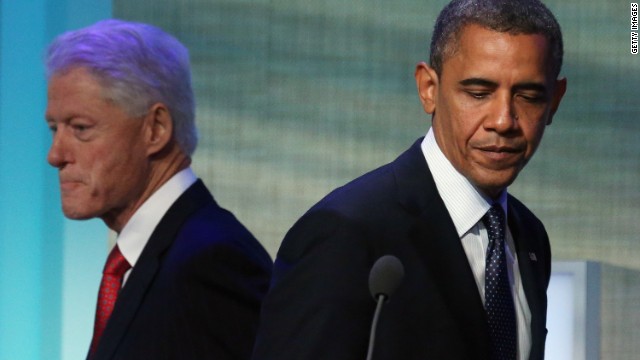 Second-term polls: How do Obama and Clinton compare?

(CNN) - A second term Democratic president, battling back against series of controversies.

President Barack Obama is facing a political situation not altogether unlike what the last Democrat in the White House, Bill Clinton, experienced during his second term.

For Obama it's the controversies over the Internal Revenue service's targeting of tea party and other conservative groups who applied for tax exempt status, the administration's handling and reaction to last September's attack in Benghazi that left the U.S. ambassador to Libya and three other Americans dead, and the Justice Department's secret collection of phone records from the Associated Press as part of a government investigation into classified leaks.

According to a new national poll, even though a majority of Americans take all three matters very seriously, Obama appears to have come out of what was arguably the worst week of his presidency with his approval rating holding steady.

According to the CNN/ORC International survey, which was conducted Friday and Saturday, 53% of Americans say they approve of the job the president is doing, with 45% saying they disapprove. The president's approval rating was at 51% in CNN's last poll, which was conducted in early April. The two point rise is well within the survey's sampling error.

Now flash back to 1998 when President Clinton–following 1997's campaign finance controversy of improper fundraising and Chinese contributions–was dealing with an emerging scandal over a sexual relationship he had in his first term with a 22-year old White House intern named Monica Lewinsky.

When the scandal first broke, at the beginning of 1998, Clinton's approval rating in a CNN/USA Today/Gallup poll stood at 59%.

"With regard to Clinton's approval rating, the key moment was his State of the Union speech in January, 1998, shortly after the Lewinsky scandal broke. His approval rating jumped ten points, to 69%, after that speech, and it stayed above 60% throughout his impeachment," says CNN Polling Director Keating Holland.

"That speech presented Clinton as on the job and ready to solve the country's problems, and congressional Republicans looked bad by contrast. Add to Clinton's high approval ratings the fact that the GOP lost five House seats in the 1998 midterm elections, and it seems clear in retrospect that politically played their hand."

After House Republicans impeached the president in December 1998, Clinton's approval rating soared to 73% and stood at 68% two months later, when the Senate acquitted him.

Clinton finished out his second term and left office in January 2001 with a 66% approval rating in CNN/Gallup/USA Today polling.