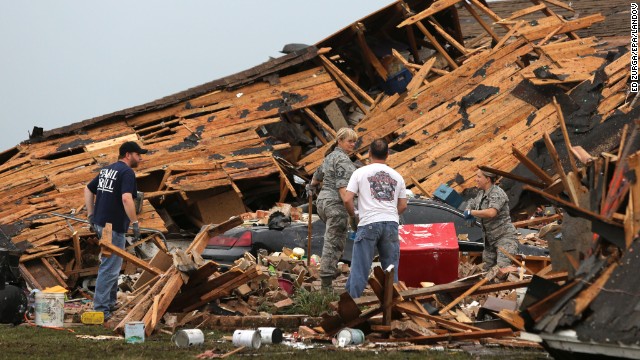 IMPACT YOUR WORLD: There are several organizations already mobilizing on the ground in Moore, and you can help as well through these groups.

TRAIL TRIVIA
(Answer below)
Who was the first president to publicly endorse extending the vote to 18-year olds?

Congress’ probe into who knew what and when at the IRS continued on Thursday – when Douglas Shulman, former head of the IRS, testified under oath in front of the Senate Finance Committee.

The newest detail from today’s hearing: Shulman said Tuesday that he was aware of some aspects of his agency's targeting of conservative groups in the spring of 2012, and took what he called the correct action of ensuring the situation would be independently reviewed, our CNN colleague Tom Cohen writes. However, the former head tax man denied full awareness of what was happening at the time, saying subordinates failed to inform him of the details.

As to why the investigation was not run “up the chain,” the only answer Shulman could give was “I don’t know.”

"I agree that this was an issue that when someone spotted it, they should have run it up the chain," said Shulman, whose tenure as IRS commissioner coincided with the controversial targeting. "Why they didn't, I don't know."

Shulman said he properly notified the appropriate Treasury inspector general about the problem when he learned that IRS workers were categorizing groups seeking tax-exempt status according to criteria including whether they had "tea party" in their name. Quite expectedly, his statement drew condemnation from members of the Senate panel.

Outrageous – that is the word Democratic Chairman of the committee Max Baucus to describe the IRS’ improper actions. “If you don't know, it sounds like somebody wasn't doing his job,” he said.

Under tough questioning by another Republican, Sen. John Cornyn of Texas, Shulman said he regretted what happened on his watch but refused to take personal responsibility for it.

“I certainly am not personally responsible for creating a list that had improper criteria on it,” he said.

This is far from the end of congressional inquiry into the IRS.

The drip, drip, drip of information about improper IRS targeting was scheduled to continue at a third congressional hearing on Wednesday, but CNN’s Dana Bash is now reporting that Lois Lerner, the official who oversaw the IRS division handling requests for tax-exempt status, will invoke her Fifth Amendment right against self-incrimination during a Wednesday appearance before a House oversight panel.

“The Committee has been contacted by Ms. Lerner's lawyer who stated that his client intended to invoke her 5th amendment right and refuse to answer questions,” the committee's spokesman Ali Ahmad wrote in a statement. “Ms. Lerner remains under subpoena from Chairman Issa to appear at tomorrow's hearing – the Committee has a Constitutional obligation to conduct oversight. Chairman Issa remains hopeful that she will ultimately decide to testify tomorrow about her knowledge of outrageous IRS targeting of Americans for their political beliefs.”

Leading Drudge: 'We Need Prayers'
The parents and guardians stood in the muddy grass outside a suburban Oklahoma City church, listening as someone with a bullhorn called out the names of children who were being dropped off – survivors of a deadly tornado that barreled through their community. For many families, the ordeal ended in bear hugs and tears of joy as loved ones reunited. Others were left to wait in the darkness, hoping for good news while fearing the worst. – Nomaan Merchant

Leading HuffPo: Climate Changed: Republican Gives Baffling Disaster Aid Explanation
Oklahoma Sen. Jim Inhofe (R) said on Tuesday that federal aid to tornado-ravaged parts of his home state will be “totally different” than a Superstorm Sandy aid bill he voted against late last year. Speaking on MSNBC, the lawmaker said that in the case of Hurricane Sandy, “everybody was getting in and exploiting the tragedy that took place.” However, he said, “that won't happen in Oklahoma.” – Christina Wilkie

Leading The New York Times: U.S. Tracked Foreigners Leaving for Canada
Hundreds of thousands of foreigners passing into Canada from the United States have unwittingly been a part of a grand experiment by the Department of Homeland Security to crack down on visitors who violate laws governing the length of their stay. – Eric Lipton

- Hope -
PRESIDENT BARACK OBAMA IN A STATEMENT ON OKLAHOMA: “If there is hope to hold onto - not just in Oklahoma but around the country - it's the knowledge that the good people there and in Oklahoma are better prepared for this type of storm than most. And what they can be certain of is that Americans from every corner of this country will be there right there with them, opening our homes, our hearts to those in need, because we're a nation that stands with our fellow citizens as long as it takes.”

- No political motivation -
PRESS SECRETARY JAY CARNEY AT THE WHITE HOUSE PRESS BRIEFING: “We did not intervene in an ongoing IG audit of the IRS because we shouldn't and it would be inappropriate to do so. We waited to respond and to take any action for the completion of that report and going again to the tenor of your questions it is important to note that the report itself and the IG himself has said they found no indication of outside influence or political motivation behind this.”

- John McCain: Getting to the bottom of life’s critical issues -
SEN. JOHN MCCAIN AT A HEARING ABOUT THE TECH COMPANY, APPLE: “What I really wanted to ask is why the hell I have to keep updating the apps on my iPhone all the time and why you don't fix that?”
APPLE CEO TIM COOK: “Sir, we're trying to make them better all the time.”

Neighbors helping a family whose home was destroyed pic.twitter.com/z7693ali5Z

Peace Corps to allow same-sex couples to serve together beginning next month. http://t.co/IrlJpHsnvq

Obama has 87% support from Ds & just 15% from Rs –an unprecedented 72pt #PartisanDivide http://t.co/MAVgmpJjXR

Sen. Inhofe to @JansingCo: his labeling of Hurricane Sandy bill as a "slush fund" is "totally different" than Okla tornado relief.

Ed Markey, who has a home in Chevy Chase , Md., has also gotten a contribution from actor Chevy Chase. #MASEN http://t.co/6Zor20hvhn

President Dwight D. Eisenhower, one of the nation's oldest presidents, was the first chief executive to endorse extending the right to vote to 18-year-olds. The change was made long after Eisenhower left office and two years after he died when Congress passed the 26th Amendment in March 1971. The states ratified the measure shortly after.

The catalyst for such change: the fact that people 18 and older had fought and died for their country in Vietnam and Korea.

Jennings Randolph of West Virginia, who served in the House and Senate from 1933 to 1985, was the primary force behind extending the vote. From 1942 to 1971, Randolph introduced legislation to do so. When Eisenhower announced his support, the president endorsed Randolph's proposal.

Getting the measure through the Senate was difficult. On this week in 1954, a bloc of Southern senators defeated a measure to extend the vote.