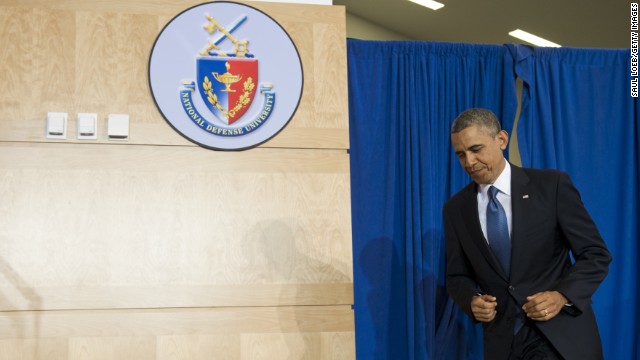 (CNN) – Justice Department probes leading to the seizure of journalists' phone and e-mail records have prompted a review of the government's practices in investigating leaks of secret information, President Barack Obama said Thursday.

In a speech that also detailed the government's use of drones to kill American citizens – acts which were originally made public through leaks of classified information – Obama said reports of investigations targeting journalists had him worried for the future of a watchdog press.

"I am troubled by the possibility that leak investigations may chill the investigative journalism that holds government accountable," Obama said, noting he had directed Attorney General Eric Holder to review the government's guidelines on such matters. Holder will convene a panel of media organizations as part of his review.

"Journalists should not be at legal risk for doing their jobs. Our focus must be on those who break the law," the president said.

His remarks came after two high-profile cases of government investigators using phone and e-mail records of reports to try and ferret out leakers of classified information with the federal government.

In the first, two months of phone records for reporters and editors at the Associated Press were obtained by the Justice Department in a probe the news service said was centered on its account of a foiled plot to bomb a U.S. airliner in May 2012.

A second investigation utilized the phone records and e-mails of a Fox News correspondent who reported on classified intelligence about North Korea in 2009. Along with e-mails and phone records, Justice Department officials tracked the reporter's movements in the State Department using his ID badge.

In the investigation into leaks to the AP, employees of the news service were never singled out as potential criminals. But in an affidavit for a search warrant filed by the FBI, the Fox reporter, James Rosen, is described as potentially being an "aider and abettor and/or co-conspirator" to the crime of disclosing secret information. Charges were never brought against Rosen or Fox News.

The Obama administration has aggressively investigated and prosecuted suspected leakers who they say put the safety and security of Americans at risk. Obama and his aides have discussed the need for a "balance" between protecting citizens and upholding the constitutionally embedded right to a free press.

"As Commander-in Chief, I believe we must keep information secret that protects our operations and our people in the field. To do so, we must enforce consequences for those who break the law and breach their commitment to protect classified information. But a free press is also essential for our democracy," Obama said Thursday.