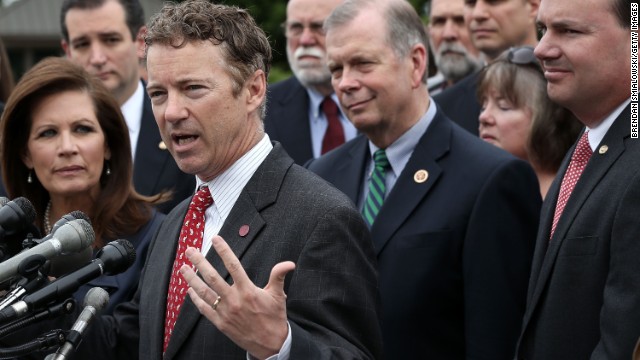 Kentucky Sen. Rand Paul announced Friday he will be on ballots in November 2016, but he told voters in his home state that they might be the only ones with a chance to vote for him.

The freshman Republican senator was returning to Kentucky from visits to a trio of states that hold sway in the presidential nominating process, visits which further stoked the speculation about his presidential interests. He indicated his intention to be on the ballot for re-election that year, but downplayed any White House ambitions.

"For now, (what) we know for sure is we're going to run for the U.S. Senate," he said, according to a report from The Independent. "The other decision can come later."

Paul posted online a link to a separate report on his appearance at the Woodford County Republican Dinner, one which did not include the quote. Both articles noted state law allows him to run simultaneously for the White House and re-election to his Senate seat.

Earlier this week he spoke at a GOP fundraising dinner in New Hampshire and before that appeared at events in Iowa and South Carolina.

He has been upfront with his interest in potentially running for the White House, but at the dinner in New Hampshire focused his attention on the party.

"We've had a lot of friends up here for years," he said, "but the main thing right now is to not talk about me so much, but rather how to grow the party."

- CNN's Gregory Wallace and Mark Preston contributed to this report