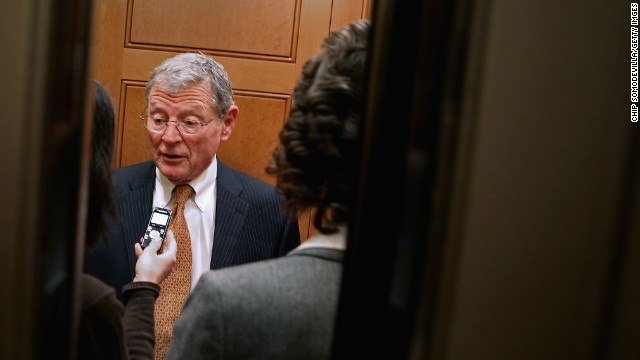 (CNN) - The images of destroyed homes, crushed playgrounds and shattered lives around storm-ravaged Moore, Oklahoma, are heart-wrenching enough, and yet more devastating because the area has been hit hard before by tornadoes.

Sen. Jim Inhofe, a Republican from the state, asked people around the country to donate to victims from Monday's deadly tornado as they seek to "overcome this tragedy as we have demonstrated in the past.

"Fourteen years ago, on May 3, 1999, an eerily similar tornado struck the same area of Moore, Oklahoma, and again in 2003," he said in the GOP weekly address. "The images and the stories from the storm earlier this week are nothing new. Oklahoma will persevere and overcome this tragedy as we have demonstrated in the past."

Monday's EF5 twister tore through Moore and nearby communities near Oklahoma City in the middle of the afternoon. Two dozen people were killed, including 10 children.

Inhofe specifically noted the "selfless" acts of teachers who protected their students at two elementary schools in the path of that storm.

"Second-grade teacher Tammy Glasgow kept praying with her students and reminding them how much she loved them as she and her students took cover in a school closet," he said.

"We had Suzanna Haley - she was a first-grade special education teacher in Briarwood Elementary School, suffered a severe injury when part of a school desk was impaled in the back of her leg while protecting the students in her classroom. The most heart-wrenching testimony I've heard is from the person who was responsible for matching the missing kids with the missing parents," he said.

Officials estimate that 12,000 homes were damaged or destroyed.

Inhofe urged his audience to donate to the Red Cross and Salvation Army, two groups among the many on the ground there.

Also active in the region is FEMA, the federal disaster relief agency which has been at the center of political fights over aid.

Inhofe initially voted against appropriating additional federal funds for relief after Superstorm Sandy hit the East Coast in October, joining other Republicans who said the aid should be offset by spending cuts in other areas.

He told CNN on Tuesday that he did not foresee that situation arising this time because "we wouldn't need (an) additional appropriations bill" to fund costs in Oklahoma.

The state's other Republican senator, Tom Coburn, also voted against Sandy relief funding over budget concerns but wrote in an opinion piece on CNN.com this week "this disagreement doesn't exist" when it comes to his state.

"The Federal Emergency Management Agency has $11.6 billion available in the fund for assistance to victims in all federally declared disasters, and this is likely more than sufficient to help victims in Oklahoma," he wrote.

In the weekly address, Inhofe said his state is hurting, but appreciates the outreach from across America.

"Devastation such as this tends to bring us closer together as a country," he said.

Monday's tornado followed another twister that killed two people in the state the day before, authorities said.