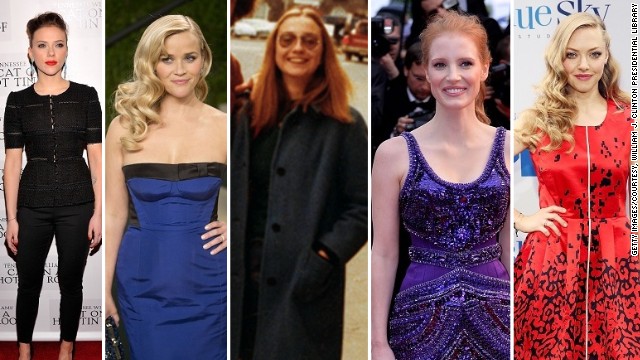 Who will play Hillary Clinton?

(CNN) – Four of Hollywood's hottest young actresses are in the running for the political role of a lifetime: Hillary Clinton.

According to The Independent, Scarlett Johansson, Reese Witherspoon, Jessica Chastain and Amanda Seyfried are all up for the part of Clinton in the upcoming biopic "Rodham," which focuses on Clinton's time as a House Judiciary Committee lawyer in her twenties. She served as a counsel to the committee during the Watergate scandal.

"They're all wonderful actresses. We're very fortunate that a lot of really great actors are interested in playing these roles. We're in an enviable position," the film's director, James Ponsoldt, told the newspaper.

Johansson, who won a Tony in 2010, was a vocal supporter of then-candidate Barack Obama during the 2008 Democratic nominating process, when his top rival was Clinton. She also campaigned for Obama in 2012, and spoke at the Democratic National Convention in Charlotte.

Witherspoon attended fundraising events for Obama in 2012. Many have compared Tracy Flick, the ambitious high school class president candidate that Witherspoon portrayed in the 1999 film "Election," to Hillary Clinton.

Chastain took a politically sensitive role in the 2012 film "Zero Dark Thirty," which was criticized for its portrayal of torture, as well as for the access to government officials its filmmakers were granted. Chastain earned an Oscar nomination for playing Maya, the driven CIA agent who helped locate Osama bin Laden.

"Regardless of people's political affiliation or how they feel about Hillary Clinton, you don't find people who question the quality of her intelligence or her drive," Ponsoldt told The Independent. "I want a wonderful actress who could embody that."

There's no word yet on who will play Bill Clinton.