Holder runs into roadblocks on off-the-record meetings on leaks

Washington (CNN) - Attorney General Eric Holder's plans to sit down with media representatives to discuss guidelines for handling investigations into leaks to the news media have run into trouble.

The Associated Press issued a statement Wednesday objecting to plans for the meetings to be off the record. "If it is not on the record, AP will not attend and instead will offer our views on how the regulations should be updated in an open letter," said Erin Madigan White, the AP's media relations manager.
END_OF_DOCUMENT_TOKEN_TO_BE_REPLACED

Washington (CNN) - House Republicans continued to demand answers Wednesday on the Benghazi attack, one day the House Oversight and Government Reform Committee issued a congressional subpoena to current and former State Department officials over the issue.

In a letter to U.S. Secretary of State John Kerry, 15 members of the House Foreign Affairs Committee demanded to know what actions were taken against four people Kerry had testified would face consequences for failing to protect Chris Stevens, the ambassador to Libya, and others at the U.S. mission in Benghazi,
END_OF_DOCUMENT_TOKEN_TO_BE_REPLACED 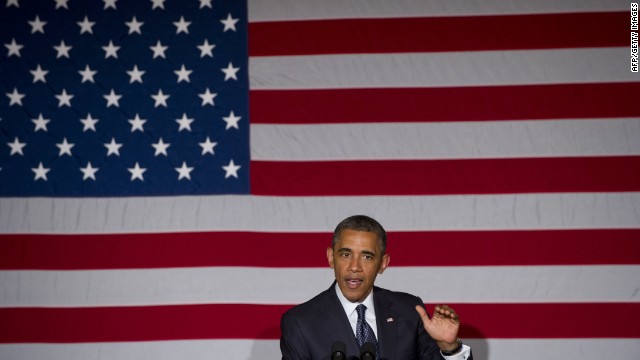 Obama: Washington can still be ‘fixed’

Chicago (CNN) – Speaking at a political fundraiser, President Barack Obama promised Wednesday to work tirelessly to convince the American people that Democrats’ ideas are the right ones.

But at the same time, he attempted to strike a bipartisan tone, acknowledging that while Washington may appear broken, “it can be fixed.”
END_OF_DOCUMENT_TOKEN_TO_BE_REPLACED

Officials: Obama to tap ex-Bush official as next FBI chief

Comey is a former prosecutor who worked in New York and Virginia, taking on terrorism cases and prosecutions of executives from WorldCom, Adelphia and Imclone, according to an official biography. He served as deputy attorney general in President George W. Bush's administration.

What does it take to portray the President of the United States?

For every president, there is an actor. And for every film that portrays the commander in chief, there is someone who must choose a face of history.

The next visage for our viewing pleasure is Rob Lowe. It was announced Tuesday that the man who recently played Liberace's plastic surgeon on HBO, will now play John F. Kennedy on National Geographic.

Video: Christie opens up about his future and weight

Browne said the letter to Bloomberg contained a threat to the mayor and referenced the debate on gun laws.

Washington (CNN) – Under fire for seeking records of journalists' communications, government officials pushed back Wednesday against statements from Fox News that it was not notified about government subpoenas to the organization.

On Wednesday a law enforcement official showed CNN paperwork to support Justice's claim that on August 27, 2010 three messages were sent out about the subpoenas and went to both a lawyer for Fox News' parent company, News Corporation, and reporter James Rosen.
END_OF_DOCUMENT_TOKEN_TO_BE_REPLACED

CATCHING UP: 5 things about the controversy surrounding AG Eric Holder... Attorney General Eric Holder, a political lightning rod for Republican critics of the Obama administration, is under fire for two cases involving secret subpoenas or searches for phone records and other information of journalists involved in reports about leaked classified information. – Tom Cohen

END_OF_DOCUMENT_TOKEN_TO_BE_REPLACED

The 'other' Obama in the campaign spotlight

(CNN) - On the day that her husband keynotes a major fundraiser for House Democrats, first lady Michelle Obama is also flexing her fundraising muscles.

While President Barack Obama travels to their hometown of Chicago to keynote Democratic Congressional Campaign Committee events, the first lady headed to Boston to help bring in the bucks for the party's Senate candidate in next month's special election in Massachusetts. From Boston, Michelle Obama moved on to New York City, headlining two events for the Democratic National Committee.
END_OF_DOCUMENT_TOKEN_TO_BE_REPLACED