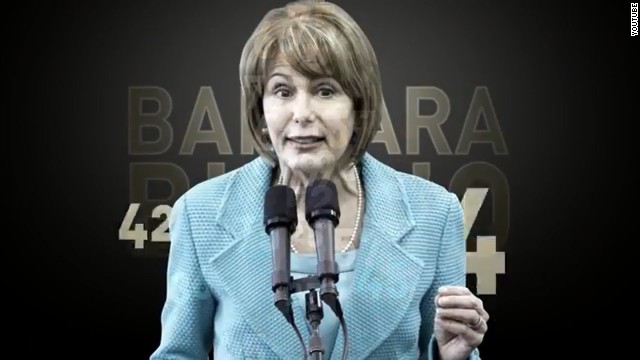 (CNN) – A new television ad airing in New Jersey hits Democratic state Sen. Barbara Buono, who's running for governor in the state, for her record on taxes during her time in Trenton.

The spot from the Republican Governors Association will be backed by a "large buy," a spokesman for the group said.

"Barbara Buono by the numbers: As a Trenton politician, she voted to raise taxes 154 times. Under her, property taxes up 70%. Backed a 16% sales tax increase. Utilities, nursing homes, cell phones, parking lots, lottery wins, gyms – she taxed them all," a narrator in the spot proclaims. It goes on to criticize Buono for her role in crafting then-Gov. Jon Corzine's budget, which the spot claims "drove New Jersey $2 billion into debt."

The spot is the first from the RGA in the battle between Buono and incumbent Republican Chris Christie, who served as the vice chairman of the GOP governors group last year.

"Governor Christie and his national Republican sponsors' false attacks on Senator Buono's record are attempts to distract from the truth: they have made careers off defending millionaires over working and middle class families," Buono campaign spokesman David Turner wrote in response to the ad. "Senator Buono has consistently fought to make millionaires pay their fair share to provide property tax relief to the New Jersey's middle class."

The Democratic Governors Association has yet to go up with ads supporting Buono in her bid against Christie. The candidate's campaign went up its first ad last week, spending $1 million to air the spot.

With two major media markets-those of New York City and Philadelphia-covering most of New Jersey, purchasing ad time can be expensive, with millions of dollars required to buy substantial time in the area.

Christie, for example, spent $1.2 million on his first re-election ad earlier this month.

Polls indicate the incumbent governor has a strong advantage over Buono, with the most recent Quinnipac University poll showing Christie ahead by Buono, 58% to 26%.