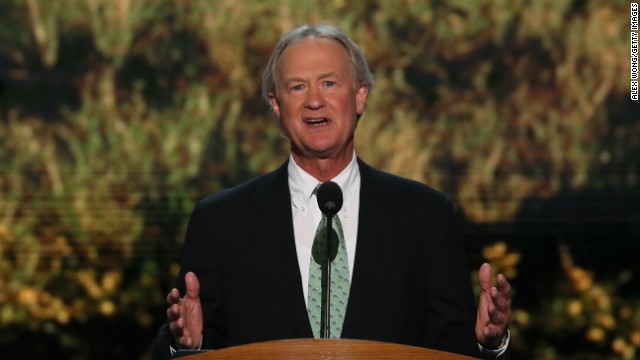 (CNN) - Rhode Island Gov. Lincoln Chafee, an independent, plans to run for re-election next year as a Democrat, his office confirmed Wednesday to CNN.

The first-term governor became the first governor in the state's history to serve as an independent when he was elected in 2010.

Christian Vareika, a spokesman for Chafee, said the governor will sign affiliation papers Thursday morning at Warwick City Hall. The story was first reported by Politico.

President Barack Obama, through a statement released by the Democratic National Committee, welcomed Chafee to the party.

"For nearly 30 years, Linc Chafee has served his beloved Rhode Island as an independent thinker and leader who’s unafraid to reach across party lines to get things done," Obama said. "I enjoyed working with Linc when he was a Republican in the United States Senate, and I look forward to continuing that collaboration on the issues that matter not just to the Democratic Party, but to every American."

Chafee endorsed Obama in 2008 and served as a national co-chair for the president's re-election campaign last year.

Rhode Island is known as a reliably blue state; both of its U.S. senators are Democrats, and the party has a majority in both houses of the state legislature. The state has also voted Democratic in every presidential election since 1988.

Earlier this month Chafee enthusiastically signed a bill that legalized same-sex marriage, making his state the 10th in the country to give gay and lesbian couples the right to marry.

“Lincoln Chafee flip-flopped again today to switch his party registration. Make no mistake, this was a decision based purely on politics, not policy," Cox said in a statement. "Lincoln Chafee’s record as Rhode Island’s governor is clear: fewer jobs and higher debt. With his inability to manage his state or create a jobs-friendly environment, he will fit right in with today’s group of Democratic Governors.”

A former Republican U.S. senator, Chafee was appointed to the Senate seat vacated by his father, John Chafee, when he died in October 1999. Then-Gov. Lincoln Almond appointed Chafee to the seat to complete the remainder of his father's term, and Chafee won election on his own in 2000.

Chafee was known in the Senate for his moderate leanings. He frequently found himself at odds with his own party during the George W. Bush administration, and in 2006, he lost his re-election bid to then-Democratic candidate Sheldon Whitehouse.

Chafee became an independent a year later and then ran for governor in 2010, besting the Republican and Democratic nominees with 36% support.

Of the country's governors, Chafee is currently the only independent, while 30 serve as Republicans and 19 serve as Democrats.