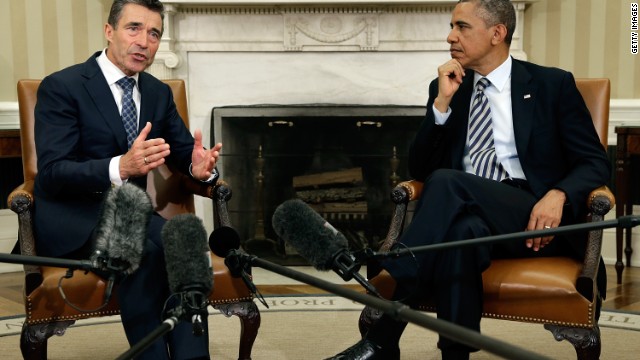 White House (CNN) - There was no mention of Syria Friday when President Obama made brief public remarks about his meeting with NATO's secretary-general on Afghanistan and other pressing global security issues at the White House.

But in an interview with CNN, NATO Secretary-General Anders Fogh Rasmussen said the ongoing crisis was very much on the agenda behind closed doors.

"We discussed Syria and both agreed that the best way forward is a political solution," Rasmussen said.

A crucial player in any eventual plans for military action in Syria, the secretary-general cautioned finding a peaceful, diplomatic resolution to the violence could get complicated.

A case in point - Russia's plans to provide anti-aircraft missiles to the Syrian regime of Bashar al-Assad. Such weaponry could offer al-Assad's forces a deterrent against a future no-fly zone over Syria.

"I would urge all actors to refrain from steps that could be potential obstacles to finding a political solution," Rasmussen said.

The ultimate stumbling block on the path to peace would be conclusive evidence of the use of chemical weapons by the al-Assad government, an action that would cross a "red line" set by President Obama.

Rasmussen reiterated the White House position that United Nations inspectors must be granted access to Syria to answer the chemical weapon question.

But he added NATO has a red line of its own when it comes to Syria, specifically the sometimes volatile Syrian-Turkish border.

"As far as NATO is concerned we have one red line and that is the defense of our ally, Turkey," Rasmussen told CNN.

"This is the reason why we have deployed Patriot missiles to Turkey to ensure effective defensive protection of the Turkish population and territory against any attack including, of course, a potential chemical attack."

Earlier this week, Arizona Senator John McCain crossed the Syrian-Turkish border to meet with commanders of the Free Syrian Army.

"I think it also helps to engage with the opposition," Rasmussen said.

White House officials maintain "all options" are under consideration for dealing with al-Assad. But the secretary-general indicated political options appear to be gaining the most traction.

Rasmussen offered his support for efforts to set an upcoming US and Russia led conference aimed at finding peace in Syria.