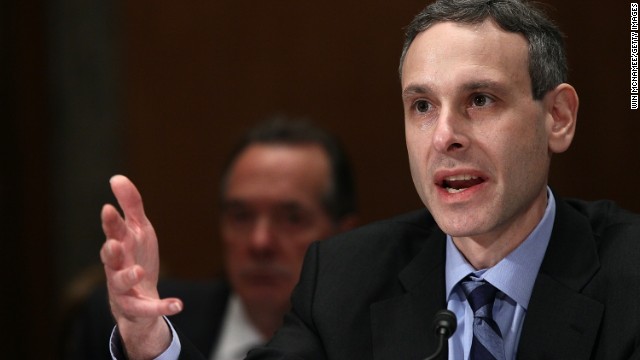 The conservative website Breitbart posted that "the goal of Public Campaign is to target political groups like the conservative non-profits at issue in the IRS scandal," naming the campaign finance reform group where Doug Shulman's wife, Susan Anderson, is the senior program adviser.

Public Campaign spokesman Adam Smith said the Breitbart description "is not at all accurate."

Shulman led the IRS during the period from 2010 to 2012 when the agency subjected non-profit application from "tea party" and "patriot" groups to increased scrutiny. Shulman said he was not personally responsible for the practice, which an agency official acknowledged shortly before an inspector general report would have disclosed it, and his successor apologized to a congressional committee for agents' "foolish mistakes."

He left the IRS in November 2012 and said at a congressional hearing earlier that year, "there is absolutely no targeting" of conservative groups for political reasons. Last month, agency officials described the practice as a method of filtering applications which poured in following the Supreme Court's Citizens United decision on campaign spending.

The Daily Caller said that statement "belittled the concerns of disenfranchised conservatives."

Smith, the Public Campaign spokesman, said the group's statement was an immediate reaction to the IRS and pointed CNN to a longer Nyhart statement, which welcomed congressional investigation.

The revised statement said the IRS must be non-partisan and that "there are legitimate questions to be asked about political organizations posing as social welfare groups."

On Saturday, he rebuked the conservative postings, writing, "Public Campaign and its employees have worked passionately and tirelessly for 15 years to raise the voices of everyday Americans of every political stripe in our democracy. When the controversy involving the IRS emerged recently, we condemned the selective targeting of groups based on ideological considerations. To suggest otherwise is a gross mistreatment of the facts."

Asked by CNN, Smith had no reaction to report from Anderson. Shulman was not immediately available for comment.