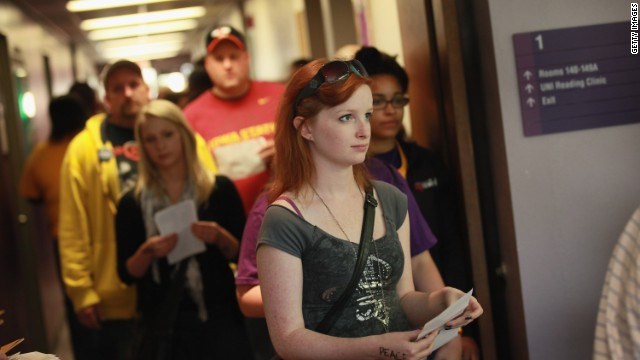 That's how young voters perceive the Republican Party, according to a new report by the nation's largest Republican youth organization.

The College Republican National Committee released a 95-page study Monday detailing its study on voters between the ages of 18 and 29, following President Obama's sweeping victory among the voting bloc against GOP nominee Mitt Romney.

Obama won 60% of the youth vote, compared to Romney's 37%, amount to about five million more votes for the incumbent president, according to CNN exit polls. In 2008, Obama bested Sen. John McCain among young voters, 66% to 32%.

The new report comes just months after the Republican National Committee released its own internal review, which showed similar results in the perceptions of the party across wider demographics. The CRNC argues Republicans have scored well among youth in the past with Ronald Reagan and offered five target areas for which the GOP can refocus its messaging to attract a younger audience.

"The GOP absolutely can win over young people again," the study states. "But this will not occur without significant work to repair the damage done to the Republican brand among this age group over the last decade."

Respondents in the CRNC study said Republicans shouldn't concede "caring" and "open-minded" to the left, with same-sex marriage being an issue of high importance.

"In the short term, the best course of action for the party may be to promote the diversity of opinion within its ranks (after all, for quite some time, former vice president Dick Cheney was to the left of President Obama on same-sex marriage)," the report states.

But the study finds that young voters want to focus more on economic issues than social maters. The GOP has to convince young people, the report states, that it's the party for entrepreneurs and start-ups, not for those who have already become successful. Nearly half of young people say they want to start their own business one day, the study notes.

"We've become the party that will pat you on your back when you make it, but won't offer a hand to help you get there," the authors write.

But Republican messages on principle and big government may be hurting the party, according to the report.

The Winston Group conducted the survey online in partnership with YouGov by interviewing 800 registered voters between 18-29 nationwide between February 27 and March 4. The CRNC also conducted focus of young Obama voters in California, Florida and Ohio.