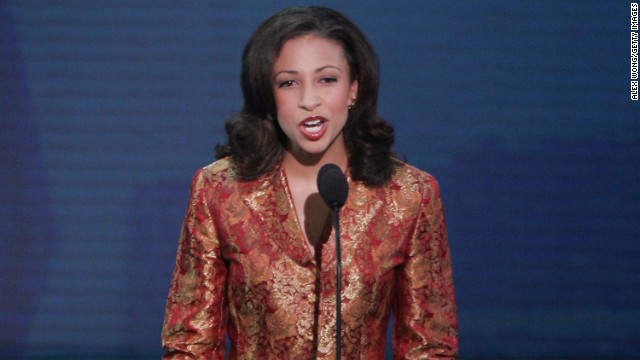 She's the second former holder of the Miss America crown to publicly eye a spot on Capitol Hill – in May, the 2000 winner Heather French Henry said she was considering jumping into the U.S. Senate race in Kentucky, which could see her pitted against Senate Republican Leader Mitch McConnell.

Making her announcement in a video Tuesday, Harold said she was "blessed to have had some incredible opportunities," including her year-long tenure as Miss America, along with her degree from Harvard Law School, which her website says she financed thanks to scholarships from her pageant win.

"Our lives are defined not by the titles we earn but rather by the service we render," Harold says in the video. "At each point in my life, I've sought to serve, whether it was defending religious liberties as an attorney, preventing youth violence and bullying as Miss America, or doing prison ministry as a volunteer."

Since receiving her law degree, Harold has worked as a lawyer in Illinois. She served on President George W. Bush's "W Stands for Women" steering committee during his 2004 re-election bid, and spoke at that year's Republican National Convention.

In Kentucky, French Henry said in early May that she was "not ready to confirm or deny" that she was considering a run against Senate Minority Leader Mitch McConnell.

McConnell isn't up for re-election until November 2014, but the race has drawn early headlines as Democrats consider stepping in. Actress Ashley Judd mulled a bid, eventually deciding against running after attack videos from McConnell started airing.

On her official website, French Henry is listed as a veterans advocate, author/illustrator, artist/fashion illustrator, fashion designer, and public speaker. Her biography notes she received a bachelor's and master's degree in Fashion Design from the University of Cincinnati.

She's married to Steve Henry, the former lieutenant governor of Kentucky, who himself ran for U.S. Senate in 1998. He was embroiled in numerous controversies during his tenure, including using state employees to work at his wedding, and spending state funds to travel to the Miss America pageant.

After the Kentucky GOP described French Henry as a "bottom-of-the-barrel pick" for Democrats, the potential candidate took to her blog to decry the nasty state of politics.

"This is why the nature of politics has to change...it should not be about the 'party' but about the people," she wrote, adding that her decision on jumping into the race would come soon.