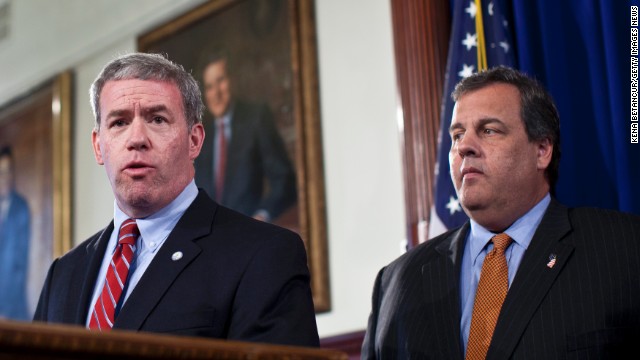 REFLECTIONS: Mitt Romney revisits his election loss and what mistakes were made… Scroll down to see what caught our eye.

TRAIL TRIVIA
(Answer below)
On this day in 1944, allied forces established five beachheads during the Normandy invasion. Name the five beaches.

In a sweeping interview with CNN’s Chief Political Analyst Gloria Borger, Romney, along with his wife, Ann, reflect on the past seven months – what it meant to go from constant attention to everyday life - and on the mistakes their campaign made.

Here are six takeaways that caught our eye today:

On the mistakes: “There were a number of times that I said things that – that didn't come out right,” Mitt Romney said. “And, you know, now and then, things don't come out exactly the way you want them to come out. They don't sound the way you thought they sounded. And now, with a good opposition campaign, they grab it, they blow it up, maybe they take it a bit out of context, maybe they don't. But, it obviously, is paraded in a way that you hadn't intended.”

On whether he is over the loss: “Yes. I mean Ann and I went through an extraordinary process to become president and, her, first lady,” Romney said. “And that didn't happen. We were extraordinarily disappointed. We let a lot of people down, let ourselves down. I think the country would be better off had I been elected president. I wouldn't have run if that weren't the case. But at this stage, we've moved on and we're thinking about ways that we can still make a contribution to a country we love very deeply.”

On constant attention to relative obscurity: “It's what it's like,” Ann Romney said about losing the election. “You're in this bubble of Secret Service and automobiles and planes and private, you know, jets, with the 737s and the entire press corps following you. And then bang, done. I mean for anyone that would be a difficult adjustment. … Mitt's father used to say this and I - and I loved it. He said politics is the fastest way to go from who's who to who's that?”

On working with the White House: “I haven't heard from the White House since our meeting,” Mitt Romney said about his post-election visit with Obama. “And, you know, that was a very gracious thing. The president and I had a very cordial meeting, shared lunch together and - and I spoke about presidential legacies.”

On advice for future candidates: “Don't make any mistakes. Be perfect,” Mitt Romney said with a laugh. “The funny thing is everyone says ‘be spontaneous, don't act like you are being crafted.’ Well today, everything you say is being captured by video or hand-held camera. So jokes, for instance, will get you in trouble. Anytime you are trying to be funny you are likely to get in trouble. You've just got to be very, very careful.

On their son running for Senate: “I would say don't do it to Tagg, I would,” Ann Romney said.

Extended excerpts of the interview with Mitt and Ann Romney will air on "The Situation Room" at 5 p.m. ET and 6 p.m. ET.

Leading CNNPolitics: 'Mr. Spock' in IRS video apologizes for 'embarrassing' mistake
An Internal Revenue Service official involved in a 2010 conference cited for wasteful spending said Thursday no rules were broken and no fraud occurred. Though he acknowledged that, "in hindsight," much of the spending should have been more closely monitored or never should have happened. – Tom Cohen

Leading Drudge: What Big Ears You Have!
The National Security Agency is currently collecting the telephone records of millions of U.S. customers of Verizon, one of America's largest telecom providers, under a top-secret court order issued in April. The order, a copy of which has been obtained by The Guardian, requires Verizon, on an "ongoing, daily basis," to give the NSA information on all telephone calls in its systems, both within the U.S. and between the U.S. and other countries. – Glenn Greenwald for The Guardian

Leading HuffPo: Blow To The Bargain
The Center for American Progress, a pillar of the Democratic establishment in Washington, is walking away from the broad negotiations aimed at reaching a "grand bargain," the pursuit of a deficit-reduction deal that has dominated the political agenda since mid-2010. – Ryan Grim

Leading Politico: 'Bush's 4th term'
The outrage over President Barack Obama’s authorization of a nearly limitless federal dive into Americans’ phone records obscures a hiding-in-plain-sight truth about the 44th president many of his supporters have overlooked for years: For all his campaign-trail talk of running the “most transparent administration” in U.S history, Obama never promised to reverse the 43rd president’s policies on domestic anti-terrorism surveillance — and he’s been good on his word. – Glenn Thrush

Leading The New York Times: Verizon Case Offers Glimpse of Vast N.S.A. Surveillance
The United States government has been compiling a huge database of calling logs of Americans’ domestic communications under a hotly debated section of the Patriot Act for at least seven years, but counterterrorism officials seek additional permission from a secret national security court before scrutinizing any particular caller, the top lawmakers on the Senate Intelligence Committee said on Thursday. – Charlie Savage and Edward Wyatt

- Democratic senator demands full Senate briefing on phone logs -
DEMOCRATIC SEN. BARBARA MIKULSKI AT AN APPROPRIATIONS COMMITTEE HEARING WITH ATTORNEY GENERAL ERIC HOLDER: "When I read The New York Times this morning it was like, `Oh God, not one more thing.’ And not one more thing where we are trying to protect America and then it looks like we are spying on America. I think the full Senate needs to get a brief on this and I think we need the attorney general and I think we need the National Security Agency and other appropriate people."

Gut Check Full Service: Republican Sen. Saxby Chambliss told reporters earlier in the day that "every member of the United States Senate has been advised of this."

- A new low, says Rand Paul -
REPUBLICAN SEN. RAND PAUL IN A WRITTEN STATEMENT TO THE PRESS: "The National Security Agency’s seizure and surveillance of virtually all of Verizon’s phone customers is an astounding assault on the Constitution. After revelations that the Internal Revenue Service targeted political dissidents and the Department of Justice seized reporters’ phone records, it would appear that this administration has now sunk to a new low."

- Fatigue, not scandals -
ATTORNEY GENERAL ERIC HOLDER AT A HEARING ON CAPITOL HILL: "The tipping point might be fatigue. You get to a point where you just get tired. Beyond that, beyond that, you know the tipping point – I mean I try. There are certain goals that I set for myself and for this department when I started back in 2009 – when I get to a point where I think I have accomplished all of the goals that I set, I will sit down with the president and we will talk about a transition to a new attorney general."

- Recklessness, the president and the GOP House -
HOUSE SPEAKER JOHN BOEHNER IN A PRESS CONFERENCE ON CAPITOL HILL: “This morning I sent the president a letter urging him to reconsider his reckless threat to shut down the government later this year. In veto threats of two House spending bills, both of which passed the House with overwhelming support, the White House said the president will not sign any, any spending bill unless we agree to his demands for a broader budget deal. In short, the president said higher taxes and higher spending or we're going to shut down the government. I think that's reckless.”

REFRESHER: Here's everyone who voted in the House/ Senate to reauthorize FISA/phone spying. http://t.co/QwSg5b8MiC / http://t.co/ZUYIFN6k0c

Let's see. I was a reporter for the AP in Washington. I'm a Verizon customer in America. Way to go, govt. You have my phone records covered.

As many Senate Republicans defend NSA phone surveillance, House GOP looks to pin it as an "Obama scandal." http://t.co/FcrdmCJQ6d

Rep. Jim Sensenbrenner, the Republican author of the Patriot Act, says the NSA has violated the law. http://t.co/L2LHeeHnNP

Pew poll says even opponents of same-sex marriage see it as inevitable. http://t.co/KvaMh4HJJz

These are US troops rescuing one of their own after landing craft has sunk off Omaha Beach, D-Day 1944, 69 yrs ago: pic.twitter.com/YnvYmrsWdw

#Russian Pres Vladimir #Putin & his wife said their marriage is over, ending speculation about their relationship, Russian news agency said.

Putin is single again! Mothers lock up your daughters. Or he'll lock them up for you. http://t.co/cOZrutaSFd

“You are about to embark upon a great crusade toward which we have striven these many months,” said General Dwight D. Eisenhower before tens of thousands of troops stormed the beaches of Normandy, France, on June 6, 1944. “The eyes of the world are upon you. The hopes and prayers of liberty loving people everywhere march with you. In company with our brave allies and brothers in arms on other fronts, you will bring about the destruction of the German war machine, the elimination of Nazi tyranny over the oppressed peoples of Europe, and security for ourselves in a free world.”

In total, five beachheads were established during “Operation Overlord,” the tactical name of the attack. The beaches stretched for 50 miles along the northern coast of France.

Utah and Omaha beaches were stormed by primarily American forces, while Gold, Juno and Sword were stormed by a combination of British, Free French and Canadian commandos.

D-Day launched the allied ground campaign against Nazi Germany during World War II. To this day, the D-Day landings are the largest amphibious invasion in world history.