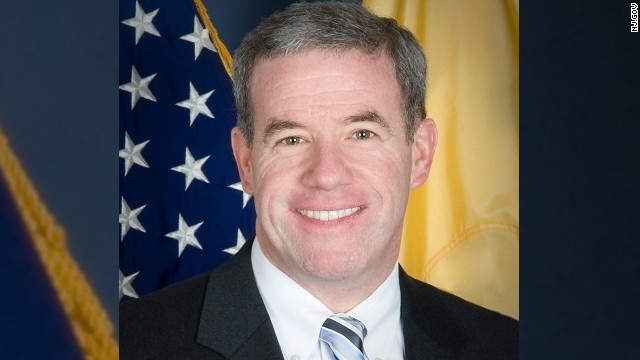 After Sen. Frank Lautenberg of New Jersey, a liberal democrat, died at 89 earlier this week, a number of names began to circulate as possible options for Christie's appointment. Chiesa was not among those names.

Despite not being among the rumored appointees, the governor commended the attorney general's service at a press conference to announce his appointment and said Chiesa was the best person for the job.

"During the last few days, as I've gotten to deliberate on this decision, it became clear to me that attorney general - would be the best person to represent the people of New Jersey in the United States Senate," Christie said.

But to Christie, Chiesa is more than just another appointment.

By tapping Chiesa, Christie has elevated a longtime friend and confidant to represent New Jersey in the United States Senate until a successor is elected in 2013.

"There are very few people in my life that I know better than Jeff," Christie said, describing his friend as "someone that I know almost as well as I know my own family."

Chiesa began serving as the attorney general of New Jersey in January of 2012 after Christie nominated him for the job. In a release issued by the Christie's office, Chiesa was credited with "attacking the problem of human trafficking," "protecting children" and "targeting gun violence."

At the time he nominated Chiesa, Christie said he had been a "close, trusted advisor and friend who has always put his duties and responsibilities first with considerable talent and integrity."

Christie and Chiesa met in 1987, when they both worked at the law firm of Dughi, Hewit & Palatucci. In 2002, when Christie was named U.S. Attorney for the District of New Jersey, Chiesa followed and worked under Christie for seven years, primarily as the Chief of the Public Protection Unit.

According to his state biography, Chiesa was "involved in all aspects of the U.S. Attorney's Office, including the management of the Criminal, Civil, Appeals and Special Prosecutions Divisions."

After working to the U.S. Attorney, Chiesa was a partner at the powerful New Jersey law firm Wolf & Samson.

That stay was short, however, because when Christie ran for governor in 2009, Chiesa left the law firm to serve as Christie's chief counsel from January 2010 through December 2011.

After the election, Chiesa also served as the executive director of Governor Christie's transition team.

Chiesa, who Christie announced would not seek reelection in the Senate after he serves out the rest of Lautenberg's term, described himself as a "conservative Republican" during the press conference and said he was looking forward to getting involved with the "important discussions" taking place on Capitol Hill.

Because he is not seeking the seat permanently, Chiesa will have likely only serve as New Jersey's senator for 4 months.