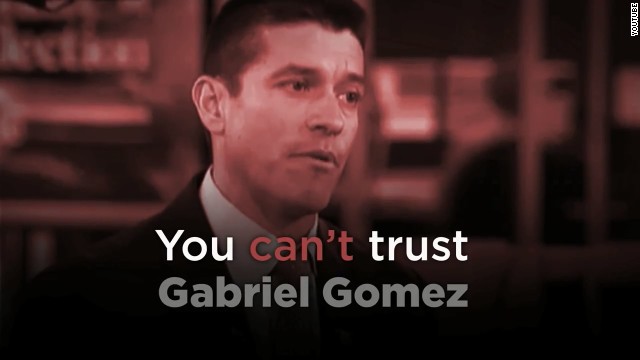 (CNN) - With two and a half weeks to go until a special Senate election in Massachusetts, two national Democratic groups are going up with television commercials for the first time in the race.

Both the Democratic Senatorial Campaign Committee, the campaign arm of Senate Democrats, and the independent Senate Majority PAC are hitting the airwaves with ads in support of Rep. Ed Markey, who's facing off against Republican Gabriel Gomez in the June 25 election.

"If you're worried about your retirement, then you can't trust Gabriel Gomez," says the narrator in the Senate Majority PAC spot. The ad goes onto claim that Gomez supports cutting Social Security benefits and includes a clip of Gomez from a March GOP primary debate saying "I think you can think about increasing the retirement age."

A Democratic source with knowledge of the Senate Majority PAC's ad buy says the group is spending a minimum of a half a million dollars to run the spot statewide.

Outside groups had stayed on the sidelines because Markey had been urging Gomez to sign a pledge to discourage outside spending in the contest, as was the case in last year's Senate battle in Massachusetts between Republican incumbent Scott Brown and Democratic challenger Elizabeth Warren, who ended up winning the election.

The DSCC confirms that it will start running spots in Massachusetts starting Friday, but wouldn't provide any other details about the buy. Their ad hits similar themes and ends with the narrator saying that "Gomez puts himself ahead of us."

While the Gomez campaign and the Massachusetts GOP are spending six figures to run commercials, neither the National Republican Senatorial Campaign or outside pro-GOP groups have gone up with spots in the contest. But the NRSC has infused money into the race and has sent staff to the Bay State to support Gomez.

Discussing the new ad buys by national Democrats, the NRSC, in their daily morning email, surmised that "either Democrats are far more worried than they let on, or they aren't worried at all and are throwing money away."

And later Friday, Gomez put out a statement saying that "reports that the national democratic machine is preparing to flood Massachusetts with more dirty, negative attacks prove that national Democrats are now in a full-fledged panic."

The most recent polls in the contest vary, with some indicating Markey with a double digit lead and other showing a tighter single digit advantage for Markey over Gomez, a first time politician.

Markey, first elected in 1976, represents the state's 5th Congressional District. Gomez is a private equity investor and former Navy Seal. The winner will serve the final year and a half of the term of longtime Democratic Sen. John Kerry, who stepped down earlier this year to become U.S. secretary of state. The winner of will also succeed William "Mo" Cowan. Democratic Gov. Deval Patrick appointed his former chief of staff to serve as interim senator after Kerry stepped down.