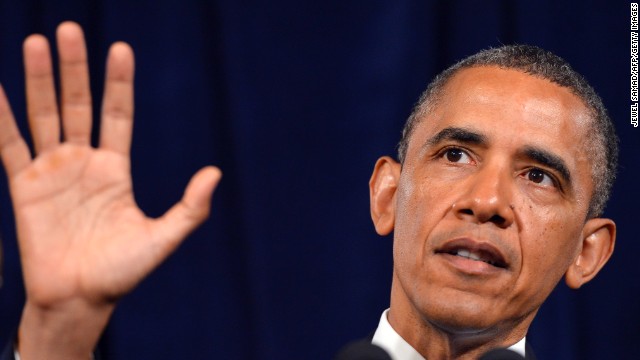 "In the states that have committed themselves to implementing this law correctly, we're seeing some good news," the president told reporters at a San Jose hotel. "Competition and choice are pushing down costs in the individual market, just like the law was designed to do."

Pointing out that many opponents of the law predicted costs would rise and choice would decrease, Obama rattled off statistics showing more insurers have applied to enter the California insurance marketplace when it opens in October, and that estimated premiums have been lower than expected.

"None of this is a surprise," the president said. "This is the way that the law was designed to work. But since everybody's been saying how it's not going to happen, I think it's important for us to recognize and acknowledge, this is working the way it's supposed to."

California is a crucial state for the success of Obamacare's health care expansion plans. For the legislation's insurance exchanges to be successful, senior Obama administration officials estimate they need to encourage roughly seven million people nationwide to enroll.

"Of those seven million people it's really important for us to get between 2.6, 2.7 million into the marketplaces who are young and healthy people, and so that's part of our goal, part of our focus," one official said on a conference call with reporters. "When you drill down a little bit deeper and you think about where a lot of these young and healthy folks are who are going to be subject to the efforts. One out of every three live in three states, the state of Texas, the state of Florida and the state of California. "

In California, the administration estimates that roughly 6 million people will be eligible for the state's insurance exchange. Of those 6 million, roughly 2.6 million will qualify for federal subsidies to help purchase insurance, and nearly half of those individuals are Hispanic.

So in addition to touting his legislation's successes, the president also highlighted a partnership between California's three largest Hispanic media organizations and the California Endowment – a private, statewide health foundation aimed at expanding access to affordable health care.

Administration officials hope this partnership will be a model to help raise awareness about state-run health insurance exchanges in Spanish-speaking communities across the country and ultimately, once the exchanges are fully operational, encourage those individuals to enroll.

"The main message I want for Californians and people all across the country, starting on October 1st, if you're in the individual market, you can get a better deal," the president said. "If you're a small business that's providing health insurance to your employees, you can get a better deal through these exchanges. You've got to sign up, Healthcare.gov, or here in California, CoveredCA.com."