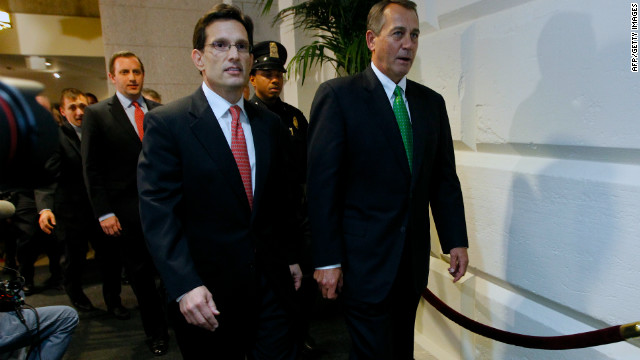 Washington (CNN) - The two top Republicans in the GOP-controlled House of Representatives will meet Wednesday with families who lost loved ones in the Newtown, Connecticut, elementary school shooting.

According to an aide to John Boehner, the House speaker and Majority Leader Eric Cantor will sit down with the families, who will be in Washington to mark six months since the massacre that left 26 dead.

"Speaker Boehner's heart goes out to the victims of this senseless tragedy and their families. He wants to hear their stories and talk about ways to reduce the culture of violence in our country," Boehner spokesman Michael Steel said.

Some Newtown families have been actively lobbying members of Congress for tougher firearm laws during this year's gun control debate. When the Senate failed to advance a set of gun proposals in April, President Barack Obama - with Newtown families standing behind - vowed the fight was not over.

Parents of seven children killed in the shooting were set to begin meeting with members of Congress on Tuesday, according to a spokesman for Sandy Hook Promise, a nonprofit group formed to help spur legislation on the gun issue and is coordinating the trip.

A separate group of families, working with the Newtown Action Alliance, will come to Washington on Wednesday and meet with members of Congress for two days. A spokesman for the group said it will also coordinate Thursday on the steps of the U.S. Capitol what it calls a "Human Ribbon of Remembrance" in memory of the 26 children and adults killed.

Besides Boehner and Cantor, the groups are not revealing who else they will be meeting with.

House Democratic Whip Steny Hoyer said the fact that Boehner is meeting with the families "shows respect for them” but added, “I dont know that they will move him to action.”

"I'm very doubtful that the House leadership has any intention of bringing a bill to the floor," he said.

Before the proposals failed in the Senate, Boehner had said repeatedly that the House would wait on the Senate to take action.

Since the Senate proposals’ failure, the House has not moved on the issue. Republican Rep. Peter King of New York and Democratic Rep. Mike Thompson of California had planned to propose a background check bill similar to the one considered by the Senate, but it has not gone anywhere since the Senate version was dropped two months ago.