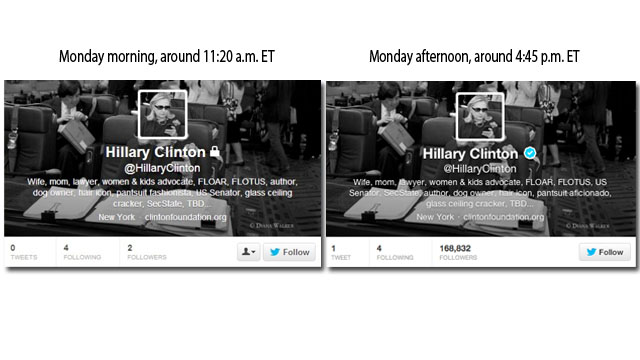 Update 12:21 p.m. ET on Tuesday 6/11: That didn't take long. Only 24 hours after unlocking her profile, Clinton has gained more than 300,000 followers on Twitter, and issued her inaugural tweet:

Thanks for the inspiration @ASmith83 & @Sllambe – I'll take it from here... #tweetsfromhillary

The names she cites are the founders of the popular "Texts from Hillary" blog, which went viral using the photo that now serves as Clinton's profile pic.

She also changed around the order of her former titles: US Senator and secretary of state are now listed before "hair icon" and "pantsuit aficionado" - which used to read "pantsuit fashionista."

Her family issued a set of welcoming responses:

Does @Twitter have a family share plan? Great to be here with @HillaryClinton & @ChelseaClinton. Looking forward to #tweetsfromhillary.

Welcome Mom! MT: @HillaryClinton Thanks for the inspiration @ASmith83 & @Sllambe – I'll take it from here... #tweetsfromhillary

She also got some friendly tweets Monday from multiple high-profile Tweeters, including President Barack Obama.

Happy to welcome @HillaryClinton to Twitter. Stay tuned for the real #TweetsFromHillary.

Welcome to Twitter, @HillaryClinton. Love the bio and looking forward to seeing what TBD turns out to be...

.@HillaryClinton's an inspiration. Look forward to reading her Twitter feed.

(CNN) - The page is empty and tweets are blocked from public viewing, but Hillary Clinton's Twitter profile appears ready for its public debut.

The handle @HillaryClinton, which features the famous photo of the former secretary of state looking down at her Blackberry, has two followers: the verified accounts of Bill and Chelsea Clinton.

Bill Clinton joined Twitter this year to great fanfare, originally being assigned the handle "@PrezBillyJeff" by comedian Stephen Colbert, but soon switched to @BillClinton. That was in April - he's now at more than 700,000 followers.