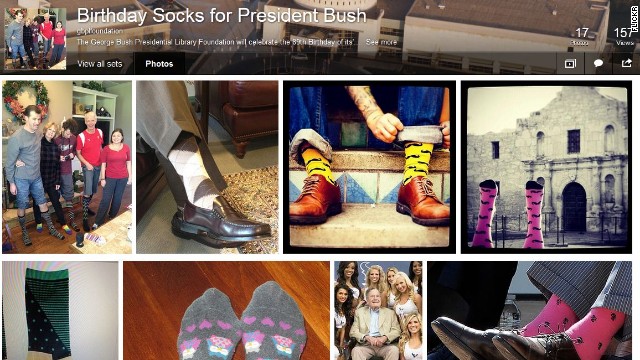 A birthday present for President George H.W. Bush: If the sock fits

Washington (CNN) - As former President George H.W. Bush laid in a hospital intensive care this past December fighting a fever and cough, he and those close to him might have doubted he would spend his 89th birthday at his beloved Maine home in Kennebunkport.

But fast forward five months after his January discharge and that is exactly where on Wednesday Bush will mark the milestone.

"Since his discharge from Methodist Hospital the president has made remarkable strides in his recovery and is ecstatic to be back in Maine to be surrounded by family," Bush spokesman Jim McGrath told CNN.

As they have done for many summers, Bush and his wife Barbara are in Maine. They have been there for several weeks with various members of the large family coming to the family compound to spend time with them. His son, former President George W. Bush, and former first lady Laura Bush visited his father and mother this past weekend to celebrate both of his parents' birthdays. (Barbara Bush celebrated her birthday on Saturday.)

To be able to make the trip "shows what a determined spirit" the former president has, McGrath said.

But this year's birthday commemoration has a twist. The George Bush Presidential Library Foundation came up with a unique idea to mark the day: wearing exuberant socks on Wednesday in honor of "41,” as he is called for his place in the count of American presidents.

Bush is well known for wearing unique socks. In April, at the dedication of his son's presidential library, he wore bright pink socks with a hint of blue. In a press release touting the birthday suggestion, the foundation said he told granddaughter Jenna Bush Hager last year he "likes a good sock."

The foundation hopes people across the country will participate. "Join us in wishing President Bush a Happy Birthday by wearing your most colorful or outlandish socks. All are invited to submit a photo wearing crazy socks to share in the birthday festivities," it said in the release asking followers to post their sock pictures to Facebook or tweet them.

The former president heard about the birthday idea and plans to join in.