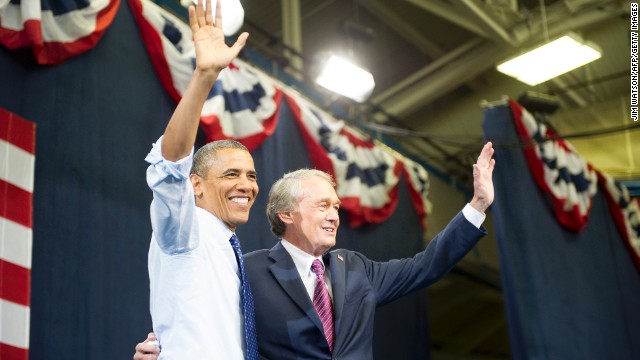 Obama for Markey in Mass.

"Here in Massachusetts you have a long history of sending smart, though, hardworking leaders to the Senate who roll up their sleeves and fight the great battles on behalf of middle class families and everyone who's trying to get into the middle class," Obama told an enthusiastic crowd, adding later: "I need Ed Markey in the U.S. Senate."

He went on to mention the late Sen. Edward Kennedy and current Secretary of State John Kerry, whose elevation to the diplomatic post opened the Senate seat currently under contention. Obama did not mention former Sen. Scott Brown, a Republican who won the last Senate special election in Massachusetts in 2010, but failed to be re-elected last year.

Markey has consistently led his rival in polls, and surveys this week showed a seven point edge for the Democrat - a tighter margin than earlier this year. Controversies engulfing the White House – including the scandal involving IRS targeting of conservative groups and the NSA monitoring of phone records – have made an impression on Massachusetts voters, the polls showed. Last week Markey criticized the collection of phone records as an example of government overreach.

But the congressman still welcomed the president's political assistance Wednesday, saying Obama was a "great leader, leading us to a brighter future." The two paid a visit to a local sandwich shop before the rally, telling diners it's important they cast ballots in this month's election.

The race between Markey and Gomez has been marked by political nastiness, though Obama refrained from direct attacks on the Republican candidate on Wednesday. He did, however, paint the GOP as resistant to reasonable compromise, and said the party was holding back important progress on a number of fronts.

Markey has characterized his rival as a partisan Republican in line with the national party, hoping to turn off moderates in the traditionally blue state.