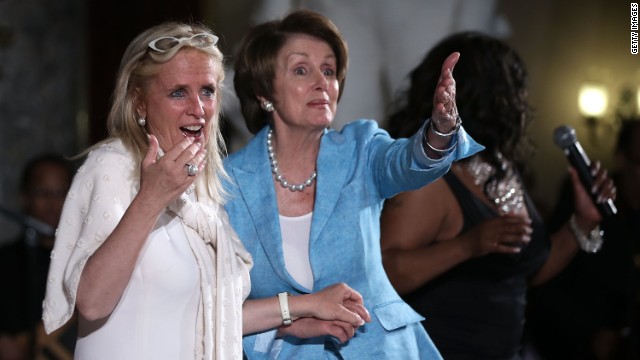 (CNN) – Motown came to Congress Thursday at a celebration for longtime Rep. John Dingell, who recently became the longest-serving U.S. lawmaker in history.

House Minority Leader Nancy Pelosi, Health and Human Services Secretary Kathleen Sebelius and Dingell's wife, Debbie, stole the show when they joined vocalist Mary Wilson as her backup singers and dancers for a performance of "Stop in the Name of Love" by The Supremes.

Wearing bright-colored suits, the women jived and strutted in Statuary Hall as Wilson got the crowd on their feet with the famous tune.

While Pelosi and Dingell famously clashed in 2002 after Pelosi endorsed his primary opponent, it all appeared to be water under the bridge as the Democratic leader grooved across the black and white marble tiles.

The celebratory cap marked the end of a ceremony honoring Dingell, who has served in the House for more than 57 years. Last Friday, he surpassed the late Sen. Robert Byrd of West Virginia as the member of Congress with the most years of service. Dingell, a Democrat from Michigan, has been elected 30 times.

Expressing appreciation and gratitude for his time in office, the congressman described himself as the "luckiest man in shoe leather." He warned, however, that Congress has become full of "ill-will," "hatred," "bitterness" and "anger."

"Congress means a coming-together, where people come together to work for great causes in which they all have an important interest. We have, I think unfortunately because of the pressure of the times, forgotten this," he said. "I'm hopeful that as we move forward it will come to our mind again, how important it is that as we pull together to work for the common good."

House Speaker John Boehner, whom Dingell described as a good friend, hosted the ceremony. He helped unveil a portrait of the congressman and expressed excitement when making a surprise announcement that the energy and commerce committee room will be called the John D. Dingell room.

Dingell gained a reputation for being a tough chairman who wielded a lot of power when he chaired the House Energy and Commerce Committee.

Vice President Joe Biden also gave remarks at the ceremony, saying Dingell is a man who carries himself in a way that is "totally consistent with being remembered for generations."