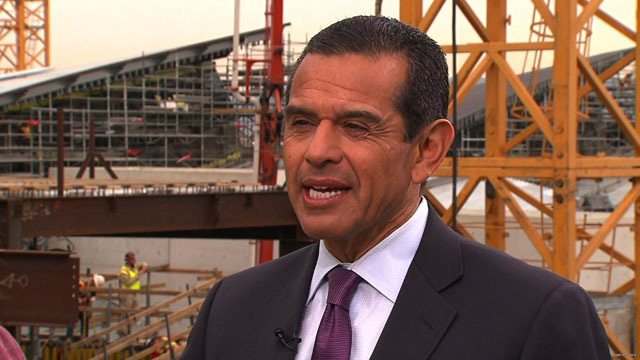 (CNN) – Los Angeles Mayor Antonio Villaraigosa – whose tenure ends this month – is already anticipating a run for California governor, he told a radio interviewer on Tuesday.

“You mentioned governor. Look, I believe in public service. I want to run for governor. In fact, I fully expect that I will," Villaraigosa told KPCC’s Larry Mantle. "I’m going to tell you something, I will never have a job like this. This city has given me more than I could have ever hoped for."

Villaraigosa, who was the city's first Latino mayor in more than 130 years, is leaving his post June 30 after eight years. He was prevented from running again due to term limits. His successor is Democrat Eric Garcetti.

California’s current Democratic governor, Jerry Brown, has not yet said whether he’ll run for re-election in 2014. Other Democrats said to be weighing the Statehouse are current Lieutenant Gov. Gavin Newsom and state attorney general Kamala Harris.

Villaraigosa has played a prominent role in national Democratic politics for years, including acting as chairman of last summer’s Democratic National Convention in Charlotte.

That event came under some scrutiny when the party platform did not include a mention of “God” and failed to state that Jerusalem is the capital of Israel.