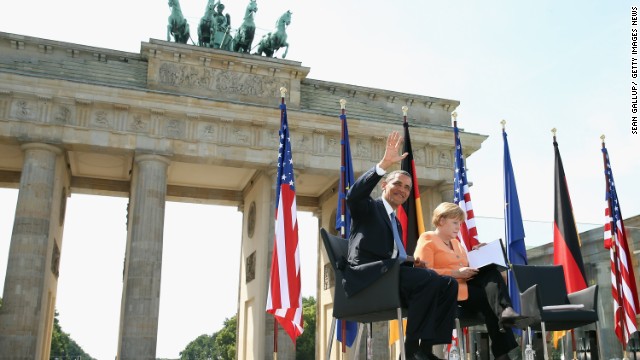 IMMIGRATION WATCH: Senate debate on a massive immigration reform bill moved slowly Wednesday as the floor sat lifeless in a quorum call for much of the day. However, behind the scenes, the bipartisan “gang of eight” senators continued its push to find compromises on key outstanding issues in hopes of building broad support for the contentious legislation. – Ted Barrett

THE BUZZ: ANN ROMNEY RETURNS TO POLITICS… During Tuesday evening's city council meeting in San Diego, Mrs. Romney stepped to the microphone during a public comment period to voice concern over the California city's procedures for developing coastline properties. She and Mitt Romney own a beachfront home in La Jolla they've been trying to expand for years. – Kevin Liptak

TRAIL TRIVIA
(Answer below)
What is celebrated on "Juneteenth"?

When then-Sen. Barack Obama took the stage in Berlin in 2008, the Democratic presidential candidate from Illinois was in the middle of his moment.

Obama was hitting his stride when he visited the Middle East and Europe in July 2008. To some, like this Guardian news piece written about Obama's Berlin speech, the candidate appeared to be walking on water.

"Once the Glastonbury-style warm-up bands and DJs had quieted, the Democratic nominee almost floated into view, walking to the podium on a raised, blue-carpeted runway, as if he were somehow, magically, walking on water," Jonathan Freedland wrote in the British newspaper. "Even from a distance, the brilliant white of his teeth dazzled."

In the sweeping address in front of 200,000 people, Obama spoke about war, nuclear weapons, and climate change – “This is the moment we must come together to save this planet.” The speech was heralded as Obama's vision of hope and change for the world, not just the United States.

"This is the moment when we must renew the goal of a world without nuclear weapons," Obama said.

If the 2008 speech had a key word, it was "moment," a rhetorical device that Obama used to hammer home the symbolism of his candidacy and the powerful changes he hoped to undertake. “People of Berlin - people of the world - this is our moment. This is our time,” Obama said.

Fast forward to 2013 and it appears the sheen of a campaign has worn off. Standing in front of the Brandenburg Gate, Obama laid out a number of foreign policy goals for the United States in a speech on Wednesday.

Gone, however, is the glowing newspaper coverage and in is the skepticism about the government surveillance programs.

Although Obama discussed similar policy goals in both 2008 and today, the latter had a noticeably different tone: more of a policy speech than one discussing an overarching vision.

“Peace with justice means pursuing the security of a world without nuclear weapons - no matter how distant that dream may be,” Obama said before calling for Russia to join the United States and decrease the size of the countries respective nuclear arsenals.

And on climate change? “Peace with justice means refusing to condemn our children to a harsher, less hospitable planet,” Obama said. “The effort to slow climate change requires bold action. … And for the sake of future generations, our generation must move toward a global compact to confront a changing climate before it is too late. That is our job.”

Leading CNNPolitics: Youngest state GOP chairman looks to appeal to 'buffet generation'
When the chairman of the South Carolina Republican Party abruptly resigned two weeks ago to take a new job in Washington, GOP activists appointed Matt Moore, the party's former executive director, to replace their leader. Moore earned another distinction in the process. The boyish-looking 31-year-old is now the youngest state party chairman in the country, in either party. – Peter Hamby

Leading Drudge: FBI Admits: We Watch With Drones
The FBI uses drones for domestic surveillance purposes, the head of the agency told Congress early Wednesday. Robert Mueller, the director of the Federal Bureau of Investigation, confirmed to lawmakers that the FBI owns several unmanned aerial vehicles, but has not adopted any strict policies or guidelines yet to govern the use of the controversial aircraft. From RT

Leading HuffPo: Pot, Meet Kettle
Sen. Lamar Alexander (R-Tenn.) spent most of Tuesday criticizing Senate Majority Leader Harry Reid (D-Nev.) for signaling that he may go back on his initial pledge to not make changes to Senate filibuster rules. But it turns out Alexander hasn't exactly stuck to his own filibuster pledge. – Jennifer Bendery

Leading Politico: The Democrats' lost decade?
Democrats fell far short of winning the House in 2012, an otherwise banner year for the party, and many are privately glum about taking back the chamber in 2014. But that grim immediate outlook raises a far more troubling longer-term prospect for Democrats: that the newly drawn congressional lines have tilted the electoral playing field so decisively in the GOP’s favor that the party could control the House through 2020. – Alex Isenstadt

- In Berlin, Obama talks of closing Guantanamo -
PRESIDENT BARACK OBAMA AT A SPEECH IN BERLIN: “Even as we remain vigilant about the threat of terrorism, we must move beyond the mindset of perpetual war. And in America that means redoubling our efforts to close the prison at Guantanamo.”

- Hispanics won’t buy immigration reform, says Cruz -
REPUBLICAN SEN. TED CRUZ IN AN INTERVIEW WITH RUSH LIMBAUGH: The idea that Republicans will win Hispanic votes by passing immigration reform was “a crock that is being sold to Republicans politicians. … Hispanics are not these single issue, monolithic voters. … You’ve got a bunch of Republican long-time office holders in Washington who are scared and listening to the consultants.”

- Rove on comparisons between Obama & Cheney -
KARL ROVE, ON FOX NEWS, TALKING ABOUT PRESIDENT OBAMA: "He’s right, he’s not Dick Cheney! Dick Cheney at least had the guts to step up and defend these National Security Agency programs, where the president was sending out underlings in order to defend it himself and then going on a talk radio program, a TV talk program, as he fled the country for the G-8 meeting."

- Even Biden has a favorite Republican -
VICE PRESIDENT JOE BIDEN TO SENATE MINORITY LEADER MITCH MCCONNELL AT THE UNVEILING OF THE FREDERICK DOUGLASS STATUE ON CAPITOL HILL: “Mitch (McConnell), I agree with you. Frederick Douglass was a great republican. One of my favorite Republicans, as are you Mitch, as are you.”

- Democrats acknowledge Boehner in tough spot on immigration -
DEMOCRATIC REP. JOAQUÍN CASTRO OF TEXAS IN AN INTERVIEW WITH CNN: We're still optimistic, you know, and there's no question that he's (House Speaker John Boehner) in a tough spot within his caucus. But I think that, in the end, we'll end up passing comprehensive reform in 2013. I hope that he doesn't invoke the Hastert Rule. If you look at the big votes that we've had...
JAKE TAPPER: The Hastert Rule, just to explain for our people at home...
CASTRO: Sure.
TAPPER: - is that you have to have a majority of the majority.
CASTRO: Yes, right. And so that - that essentially allows 25 percent of the body to control 100 percent of the legislation if you invoke that rule. But on the big votes this year, on Sandy relief, on Violence Against Women Act, uh, the debt ceiling limit extension, the speaker didn't invoke the Hastert Rule. So I hope that he stays consistent on the issue of immigration, uh, because, you know, upwards of 60 percent of the nation supports comprehensive reform with a path to citizenship.

- A Cowboy in Jersey -
NEW JERSEY GOV. CHRIS CHRISTIE DURING A VISIT TO AN ELEMENTARY SCHOOL: “My favorite football team is not the New York Giants, it's not the New York Jets and it's not the Philadelphia Eagles. Get ready now, my favorite football team are the Dallas Cowboys - which by the way is not the smartest thing for the governor of New Jersey to want to be is a fan of the Dallas Cowboys.”

New CNN/ORC Poll: Growing number rate economy as good BUT a plurality say they 're worse off than a year ago http://t.co/fpn0D09POJ

A person who cant win his district thinks he can win the State? "Allen West open to Rubio challenge" http://t.co/04IM3twFQN

LATimes: @villaraigosa wants to be governor. But in '18 vs @KamalaHarris, @GavinNewsom or nxt year vs @JerryBrownGov? http://t.co/e4T2DcJa6u

Good news? Barbie is a TV news anchor. Bad news? It was her 125th career choice pic.twitter.com/DyarqPI0c4 via @amandawalters

Juneteenth – a combination of June and this date – marks an important holiday that celebrates the final abolition of slavery in the United States. The holiday was first started on June 19, 1865, when the last 250,000 slaves in Galveston, Texas were freed by Union forces.

Union General Gordon Granger, along with his cadre of troops, rode to Galveston to announce "General Order No. 3."

"The people of Texas are informed that, in accordance with a proclamation from the Executive of the United States, all slaves are free," Granger read from the Ashton Villa in Galveston. "This involves an absolute equality of personal rights and rights of property between former masters and slaves, and the connection heretofore existing between them becomes that between employer and hired labor."

In reaction, former slaves in Galveston celebrated in the streets and the tradition on Juneteenth began.

Although the celebrations remained uniquely Texan for a number of years, Juneteenth became widely accepted by the late 1800s.

We will call it a tie. Both Christopher S. Brown (@chrisbrowntv) and Steve Liguori (@SteveL3877) correctly answered today’s trivia in lightning quick speed.