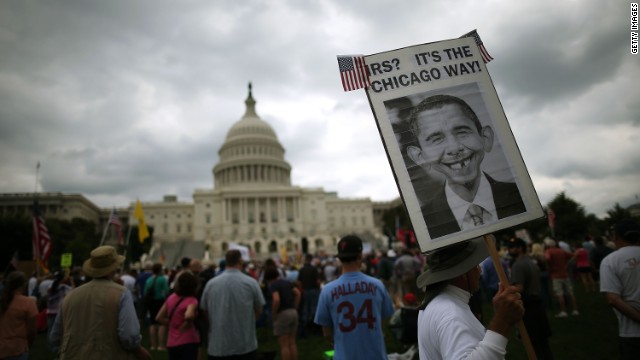 A range of congressional representatives and popular conservative speakers took to the podium as they fired off zings and digs at the IRS and the Obama administration for close to four hours.

"Anybody want to fire some IRS agents? Why don't we start with the 16,000 IRS agents that are going to implement Obamacare?" Sen. Rand Paul charged at the beginning of his brief speech.

With the crowd straining their necks and smiling broadly as Paul took the stage, the Republican senator from Kentucky said he was "horrified that my government has gotten out of control."

IRS officials have repeatedly said that the scrutinizing of tea party groups was not done out of political bias.

But the activists gathered Wednesday were not so convinced.

Sen. Ted Cruz, R-Texas, gained big applause when he declared that the IRS needs to be abolished. "And I've got a second idea: We need to take every one of those IRS agents and put them on our southern border," he said, drawing laughs.

"Now that's mostly a joke," he continued. "But I got to admit that if you were coming over illegally and you crossed the river and saw an army of IRS agents, you'd turn around and go home."

Conservative personality Glenn Beck unleashed a stream of fiery rhetoric. At one point he used a harsh anecdote about how slave owners learned to maintain control over their captives by watching circus masters chain and abuse elephants.

"Frederick Douglass was lucky enough to grow up in a house where he was taught to read, and to write, and to think. He knew that God did not make men to be masters over other men," he said.

"It is time that Americans remind themselves of this truth again, and rise up against the intimidation before the handful of peanuts from our new political circus masters are considered kindness, instead of the symbol of evil cruelty which they are," he added.

Rep. Michele Bachmann, chairwoman of the House tea party caucus, stated it's been 100 years since the beginning of the U.S. tax code. Firing up the crowd, she asked, "Don't you think that a century of oppression is enough?"

The four-term congresswoman, who's not seeking re-election next year, described herself as an "insurgent" as she talked about her former job at the IRS as a tax lawyer.

"I believe if you understand the enemy from the inside out, that's the best way to defeat them!"

Rep. Brad Wenstrup, R-Ohio, came up with his own definition of the IRS.

While organizers were promoting the rally as the tea party movement's biggest event since 2010, the turnout was smaller than expected. Many blamed the smaller audience on the fact it was happening midweek on a Wednesday.

"The tea party never went away," said Bob Mason, one of the attendees. "We just paid more attention at home."

Mason was dressed in colonial garb with a bright blue jacket and matching tri-corner hat. Most attendees though opted for the traditional yellow "Don't tread on me" t-shirt.

- CNN's Eric Marrapodi and Erin McPike contributed to this report.