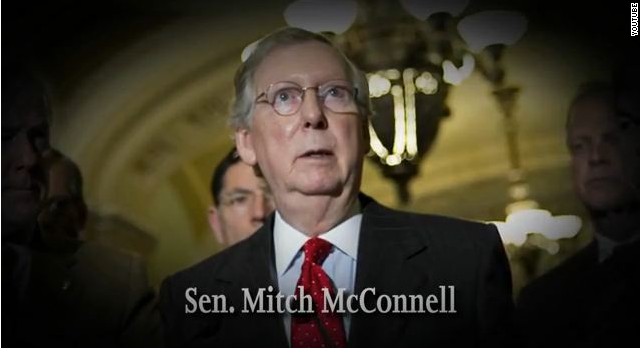 New Democratic ad says it's time for McConnell to go

(CNN) - Senate Minority Leader Mitch McConnell's re-election is still a long way away, but the ad wars in the Kentucky Republican's 2014 bid for a sixth term in the Senate started early and continue to simmer.

Two independent pro-Democratic groups announced Thursday that they were teaming up to launch a "30 years is too long" campaign that targets McConnell. The groups, the Senate Majority PAC and Patriot Majority USA, say their efforts include TV, radio and digital ads, as well as a new website, to argue that "it's time for a switch."

In the TV commercial, a clip of McConnell saying "I've lived on a government salary for 30 years" is played over and over with text on the screen saying the senator "voted to raise his pay 4 times" and that "he voted for a bailout for Wall Street and to cut Medicare for Seniors."

The groups will spend $250,000 to run the spot statewide in Kentucky, according to a source with knowledge of the ad buy.

The McConnell campaign pushed back against the commercial.

McConnell went up earlier this year with two ads. It's extremely rare for an incumbent to go up with spots so early in a campaign cycle.