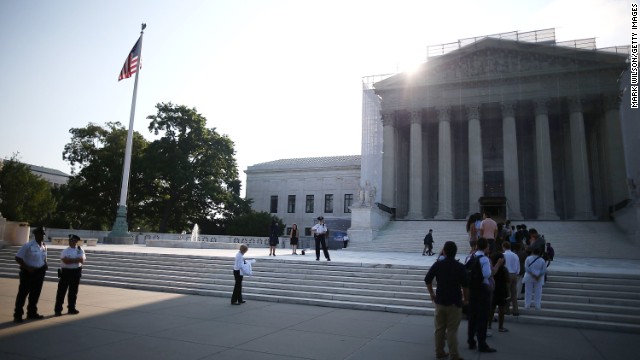 Washington (CNN) - The Supreme Court side-stepped a sweeping decision on the use of race-conscious school admission policies, ruling Monday on the criteria at the University of Texas and whether it violates the equal protection rights of some white applicants.

The justices threw the case back to the lower courts for further review.

Washington (CNN) - The Supreme Court will step back into the national debate over free speech and abortion, accepting Monday an appeal on the rights of protesters outside medical clinics.

A challenge to a Massachusetts law concerns government-mandated buffer zones set up around facilities that perform abortions. 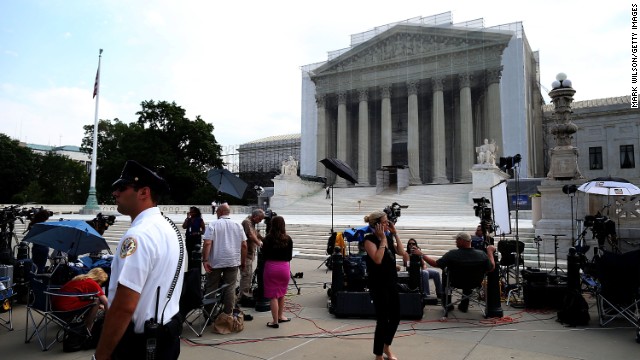 Washington (CNN) - President Barack Obama's recess appointments to a federal agency - made without Senate confirmation - will be reviewed by the Supreme Court, a major constitutional test of executive power.

At issue is whether three people named to the National Labor Relations Board lacked authority, because the presidential appointments were made while the Senate was technically in a "pro forma" session during the 2011-12 winter holiday break.

(CNN) - Less than half of Massachusetts voters say they have a lot of interest in this week's special U.S. Senate election.

According to a survey conducted by the Western New England University Polling Institute, 42% of registered voters in the Bay State say they have a lot of interest in Tuesday's contest between Democratic Rep. Ed Markey and Republican Gabriel Gomez, with three-in-ten saying they have some interest in the election, and 28% saying they have little or no interest.
END_OF_DOCUMENT_TOKEN_TO_BE_REPLACED

Rep. King wonders: 'Where is the president' on Snowden?

(CNN) – As Edward Snowden continues to avoid arrest on U.S. espionage charges, one Republican lawmaker is wondering why President Barack Obama isn't more forceful in his pursuit of the admitted leaker of national security secrets.

Rep. Peter King, the outspoken New York congressman who sits on the House Homeland Security Committee, also said on CNN's "New Day" it was time to hear directly from Obama on the growing diplomatic nightmare.
END_OF_DOCUMENT_TOKEN_TO_BE_REPLACED

Government-funded campaigns supported by half of Americans

(CNN) – Fifty percent of adults say they would support government funding for all federal campaigns while banning private contributions, according to a national survey released Monday.

The Gallup poll showed 44% would oppose such a move, while 6% weren't sure. More Democrats (60%) than Republicans (41%) said they supported public financing.
END_OF_DOCUMENT_TOKEN_TO_BE_REPLACED

CNNMoney: 76% of Americans are living paycheck-to-paycheck

Roughly three-quarters of Americans are living paycheck-to-paycheck, with little to no emergency savings, according to a survey released by Bankrate.com Monday. Fewer than one in four Americans have enough money in their savings account to cover at least six months of expenses, enough to help cushion the blow of a job loss, medical emergency or some other unexpected event, according to the survey of 1,000 adults. Meanwhile, 50% of those surveyed have less than a three-month cushion and 27% had no savings at all. "It's disappointing," said Greg McBride, Bankrate.com's senior financial analyst. "Nothing helps you sleep better at night than knowing you have money tucked away for unplanned expenses." Even more disappointing; The savings rates have barely changed over the past three years, even though a larger percentage of consumers report an increase in job security, a higher net worth and an overall better financial situation.

A week after a Government Accountability Office report said new health insurance exchanges may not be fully ready to launch in October, the government Monday began a 100-day public education blitz by releasing a new website, call center and publicity campaign. The campaign is designed to educate those who do not have insurance about how the marketplaces will work and how to obtain health insurance. Most Americans who do not have insurance now will need to purchase insurance to avoid paying a fine. The health exchanges, or marketplaces, are meant to provide less expensive, but better, insurance options that are easy to understand. Consumers will go to either a state or federal website, compare and contrast plans from several insurers based on benefits and costs, and purchase insurance. Those making less than 400% of the federal poverty level will receive financial help with the insurance, which will automatically be applied when they sign up online.